Bar owner is distant cousin of US vice-president Mike Pence 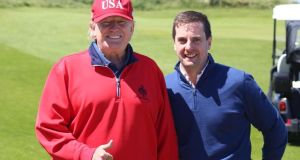 Hugh McNally, a distant cousin of Mr Trump’s vice-president, Mike Pence, managed to secure a one-to-one meeting with the US president on Friday afternoon as he finished his round of golf at his family’s resort. Photograph: Kevin Kenny, Doonbeg Golf Club 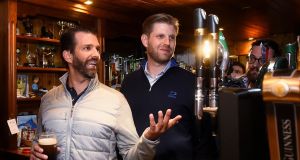 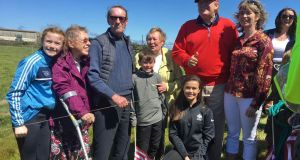 The owner of Morrissey’s in Doonbeg, one of the bars on the Trump brothers’ pub crawl, says his meeting with president Donald Trump capped a “phenomenal” week for the west Clare village.

Hugh McNally, a distant cousin of Mr Trump’s vice-president, Mike Pence, managed to secure a one-to-one meeting with the US president on Friday afternoon as he finished his round of golf at his family’s resort.

“You look like Mike but your hair is a little darker than his,” Mr Trump told Mr McNally on the edge of the 18th green, referring to his silver-haired deputy.

The Co Clare publican had the moment captured with a photograph.

“It was absolutely amazing. We play golf with loads and loads of Americans. It is just the same as anyone walking off the final green,” he said.

“There was a massive aura with him but he was just absolutely down-to-earth genuine.”

“I wish it was Mar-a-Lago and they were coming every week because it has been such good fun and such a good buzz around,” said Mr McNally, referencing Mr Trump’s Florida golf resort that he regularly visits.

Joe Russell, managing director of Mr Trump’s golf resort, said the cost of the rounds of drinks bought for the locals by the two Trump brothers at Morrissey’s and the other five pubs they visited on Wednesday night was paid for by the Trump Organisation. He dismissed claims on social media that the US taxpayer picked up the tab.

“At the end of December this year, those rounds of drinks will be paid for by this business here,” Mr Russell told The Irish Times in the resort’s public restaurant, after the president had left in his Marine One helicopter.

“It was one of the biggest rounds of drinks bought since Clare won the All Ireland.”