Varadkar believes he has a divine right to power, says Martin 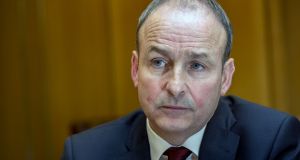 Taoiseach Leo Varadkar believes he has a divine right to power, Fianna Fáil leader Micheál Martin claimed last night amid tensions with Fine Gael over extending the deal that props-up the minority Government.

Speaking in Dublin, Mr Martin insisted his party would not discuss renewing the confidence and supply agreement, which promised Fianna Fáil’s support through three budgets, until November.

Mr Martin criticised Mr Varadkar for making public comments on renegotiating the deal, saying the Taoiseach had not had “the courtesy” to contact him about the matter. He said Mr Varadkar needed to “cop on” and respect Fianna Fáil and the agreement reached after lengthy discussions following the inconclusive result of the 2016 general election.

Mr Martin said that if Fine Gael “think they are going to get a blank cheque before the budget they can think again. That’s not going to happen”.

He was reacting to comments from Mr Varadkar earlier on Wednesday, when he called on Fianna Fáil to negotiate a renewal of the deal ahead of October’s budget.

Responding to Mr Varadkar’s comments, Mr Martin told reporters: “Would you ever go back to him and say the confidence and supply is with the Fianna Fáil party.

Mr Varadkar has put his party on a general election footing in recent weeks and ordered party headquarters to prepare to contest an election despite talk of extending the deal with Fianna Fáil.