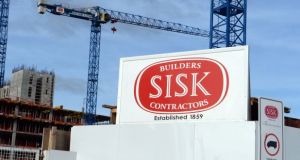 The East Quad site in Grangegorman, a joint venture set up between John Sisk & Son and Spanish construction company FCC has been closed and a deep clean will take place. File photograph: Cyril Byrne

A construction site in Grangegorman, north Dublin has had to close due to a confirmed case of coronavirus.

It is the second building site in Dublin in less than a week that has had to temporarily close due to the virus.

The State’s acting chief medical officer Dr Ronan Glynn said that the Grangegorman site was closed as a precautionary measure because a person who had worked on both sites tested positive for the disease.

The East Quad site in Grangegorman, a joint venture set up between John Sisk & Son and Spanish construction company FCC, has been shut down and a deep clean will now take place there.

It comes after a building site operated by John Paul Construction on Townsend Street in Dublin 2 was forced to close on Monday.

Dr Glynn said that between 25 and 30 confirmed cases had been confirmed at the cluster linked to the Townsend Street site and that the Grangegorman site was closed because of a link with the city centre site. He did not believe there was a second cluster.

“That site is closed out of an abundance of caution pending further risk assessment by the public health team,” he told Thursday’s National Public Health Emergency Team briefing at the Department of Health.

A spokesman for John Sisk & Son said that one case of Covid-19 was confirmed at its East Quad site, its joint venture project in Grangegorman with FCC Construction.

“We are following all HSE protocols and have shut down site for deep clean,” the spokesman said.

The site is part of a development to accommodate students at Technological University (TU) in Dublin 7.

The company said initially one employee had been found to have contracted coronavirus but following testing it had been confirmed that others were also affected.

Dr Glynn said that there was no plan to change any public heath advice to the construction industry arising out of the new cases. Public health officials expected clusters to emerge as the country reopened from lockdown, he added.

“There no suggestion that anything went wrong here,” he said.

He stressed again the importance of people in workplace settings following public health advice and urged workers to “stay physically distant and don’t drop your guard.”