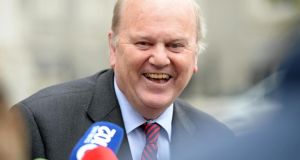 More voters would prefer income tax cuts to improved public services in next week’s budget , according to the latest Irish Times/Ipsos MRBI poll.

There is also strong support in the poll for a reduction in (or abolition of) water charges and a massive majority want the Government to loosen the purse strings on Tuesday. Asked what one thing they would most like to see if the Government did so, voters responded with a wide range of options.

When those replies were grouped, 44 per cent favoured action to improve net incomes, 21 per cent opted for higher spending on services, 33 per cent favoured measures that did not fall into either category and 2 per cent had no opinion.

Fine Gael voters were most strongly in favour of action to improve net income through a variety of tax cuts while Sinn Féin voters put the least emphasis on this issue.

Thirty-three per cent of voters referred to a reduction in tax, widening the bands, reducing or abolishing the universal social charge.

The reduction in or abolition of property tax was mentioned by 3 per cent, while other tax changes, such as cutting indirect taxes (for example VAT and excise) were mentioned by a small number of voters.

The most significant category outside the tax-spending debate was the 15 per cent of voters who listed reduction or abolition of water charges as their top priority. Sinn Féin and Labour voters were particularly exercised by this issue.

While a majority of Fine Gael voters backed such a proposal, they are less enthusiastic about it than supporters of other parties, particularly Sinn Féin and Fianna Fáil. Among Fine Gael voters, 62 per cent favour loosening purse strings but 32 per cent would like to see the deficit reduced below the original target. Sinn Féin voters are at the other end of the scale, with 82 per cent in favour of a loosening and just 12 per cent concerned at the deficit.

The poll was conducted among a representative sample of 1,200 voters at 120 sampling points in all Dáil constituencies last Monday and Tuesday. The margin of error is plus or minus 2.8 per cent.