Irish ambassador to Israel summoned by Netanyahu over Seanad bill

Bill would prevent import of goods produced in Israeli settlements 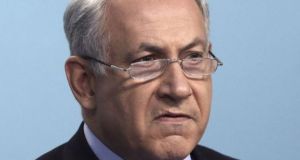 Israeli prime minister Binyamin Netanyahu has summoned the Irish ambassador to Israel to a meeting on Wednesday. Photograph: Jim Hollander

The Irish ambassador to Israel has been summoned by Prime Minister Binyamin Netanyahu to hear a protest about a bill tabled in the Seanad on Tuesday which would prevent the import of goods produced in Israeli settlements regarded by the Government as illegal.

Ambassador Alison Kelly has been summoned to the meeting on Wednesday by the Prime Minister’s office in Jerusalem .

However, the bill – launched in the Seanad by Independent Senator Frances Black – has been withdrawn until the summer at the request of the Minister for Foreign Affairs Simon Coveney.

The Government had said that it would oppose the bill if it was not withdrawn, and was backed by Fianna Fáil.

However, speaking in the Seanad, Mr Coveney was sharply critical of the Israeli settlements and said the Government shared objectives of the bill to pressure Israel to withdraw from the settlements.

A Government spokesman on Tuesday night said the bill presented problems as trade is an EU competence and also that the Government was wary such a move would undermine Ireland’s position in the Middle East.

The Israeli Government strongly condemned the Seanad motion, saying in a statement that it “gives backing to those who seek to boycott Israel and completely contravenes the guiding principles of free trade and justice.”

The European Union, along with almost the entire international community, considers all settlements over the 1967 Green Line illegal, and requires Israel to label some products sold in Europe - such as fruit, vegetables, honey and olive oil - as having been made in settlements. Such labelling is voluntary for other goods, including prepackaged foods and the majority of industrial products.