Daly told ‘not your function to speak about judges or Commissioners’ 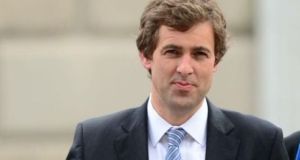 Cathaoirleach of the Seanad Mark Daly was accused of exceeding his functions as chair of the Upper House by referring to the “Golfgate” controversy during a special one-day sitting.

Independent Senator Michael McDowell told Mr Daly that the Cathaoirleach is an impartial chairman and “it is not your function to speak about judges or Commissioners on this occasion”.

The former tánaiste made his remarks after Mr Daly referred to the heroism of frontline healthcare workers who died from Covid-19, contrasted it with the Oireachtas Golf Society dinner in Clifden and then told Senators the only issue that could be address during the special sitting was emergency Covid legislation passed last week by the Dáil.

Mr Daly said that in July the Seanad stood in silence to remember the frontline healthcare workers who had died during the pandemic including Dr Syed Waqqar Ali whose daughter Dr Samar Fatima Ali had spoken publicly about her grief at his death.

Dr Ali’s heroism and the grief of his family “throw the events in Clifden in August into sharp focus”, which had undermined faith in politicians and Mr Daly said Senators had to redouble their efforts to restore that public confidence.

There were 81 members and guests of the Oireachtas golf society at a dinner in contravention of Covid-19 public health guidelines. The controversy engulfed the Government and led to a number of resignations including that of the minister for agriculture and EU commissioner.

Mr Daly said “nobody is above the rules. That is the case whether you are a Minister, a Senator, a Commissioner or a judge. The contrast between Clifden and the sacrifices that hundreds of thousands of people are making every day has been corrosive on the public trust in politicians at a time when we need all the moral authority possible in asking people to make life-altering sacrifices.”

Mr McDowell said, however, that as an independent chairman it was not Mr Daly’s “function to make announcements of that kind” and he had breached the rule for the sitting by making remarks about Clifden.

He told Mr Daly “it’s none of the Cathaoirleach’s business to talk about judges and Commissioners from that seat on this occasion”.

The Cathaoirleach said the issue would come before the Committee on Procedure and Privileges and it was about the “ordinary running of this House” which was part of the chair’s functions.

He also said agreement could not be reached despite a lot of effort over the past couple of weeks to try and get agreement for the Seanad to sit on two days to debate the Bill including one without votes because they would be sitting in the Seanad chamber and could not vote because of social distancing requirements.