Ireland must ‘open up’ to plan B to backstop 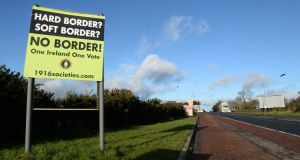 Border fears: “It would be a lot better to have an actual proper conversation now rather than wait until the 11th hour when we are in the worst possible situation.” Photograph: Dara Mac Donaill

The Government needs to open up and discuss a plan B to the Brexit backstop, according to the chair of the technical group behind proposed alternative arrangements embraced by new British prime minister Boris Johnson.

Shanker Singham, an adviser on trade who chairs the technical panel of the non-governmental Alternative Arrangements Commission, said he did not think it “wise” for Dublin not to discuss a possible no-deal exit with London given the heightened risk that this scenario could happen by the next Brexit deadline of October 31st.

He said that it was essential for the Irish, British and French customs authorities to have “critical conversations” to avoid the disruption of a no-deal “that are not happening now.”

Tánaiste Simon Coveney this week ruled out direct discussions with the UK around preparing for a no-deal.

“The best approach from the Irish Government would be to open up and at least have a discussion about these things,” Mr Singham told The Irish Times, referring to the alternative to the backstop his group had proposed, which includes a proposal to create a new common food safety zone covering Ireland and the UK.

“We may be at a point late in October where we have to have discussions. It would be a lot better to have an actual proper conversation now rather than wait until the 11th hour when we are in the worst possible situation.”

In meetings with the French and German leaders this week, Mr Johnson referred to the alternative arrangements proposed last month by the group led by former Conservative minister Greg Hands and Nicky Morgan, now UK culture secretary, that would avoid the UK entering the backstop.

The backstop is the insurance plan within the proposed withdrawal agreement covering the UK’s exit from the EU to avoid a hard border on the island of Ireland in the absence of another solution being found in future.

The House of Commons has rejected the withdrawal agreement three times amid fears the backstop could tie the UK to EU economic rules indefinitely. Mr Johnson has demanded that the backstop be scrapped.

Taoiseach Leo Varadkar has said he would listen to Mr Johnson’s alternative proposals and if he can convince the EU and Ireland, which has ruled out reopening the Brexit agreement, that they could supersede the backstop.

Mr Singham said his group had been in discussions with Downing Street about its alternative arrangements.

The commission would be publishing suggested changes to the withdrawal agreement and the political declaration, the non-binding road map setting out a future EU-UK trade deal, “in the course of the next week or so” that would add more detail to its proposed arrangements around the alternative to the backstop, he said.

Mr Singham said he could “sympathise” with Mr Varadkar and Mr Coveney if the choice around the UK’s exit was either the alternative arrangements or the backstop, but he added that “the game has changed completely in Westminster” with the election of Mr Johnson as prime minister.