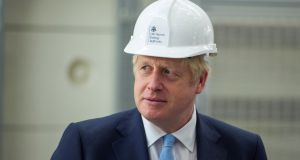 Britain’s prime minister, Boris Johnson: Would he dare to cut the British people out of the decision by holding an election too late to let them express their view? Photograph: Julian Simmonds

Remarkably, we are now in a situation where, in the name of respecting democracy, the UK is headed for a no-deal exit from the EU that is opposed by a majority of voters and a majority of MPs.

Furthermore, the law that governs the removal of a government and calling of an election means that only the narrowest path to avoiding a no-deal remains open.

The House of Commons is now in recess and will not sit again until September 3rd. Imagine that Jeremy Corbyn, the Labour leader, immediately puts down a motion of no confidence which is debated the next day (September 4th) and is passed with the support of moderate Tory MPs. Under the Fixed Term Parliament Act, this triggers a period of 14 days during which the government must try to win a second confidence vote. If by midnight on September 18th, Boris Johnson has not won a new confidence vote, then an early election is triggered.

However, the legal rules around timing an early general election give the prime minister sufficient scope to delay the vote until after Brexit takes place on October 31st.

Would Boris Johnson dare to cut the British people out of the decision by holding an election too late to let them express their view?

In order for dissolution to occur, the queen must be advised by the prime minister to issue a crown proclamation dissolving parliament. This would not occur before September 19th and the proclamation would not take effect until the next day (September 20th).

Under the Fixed Term Parliament Act, an election cannot take place earlier than 25 working days after the dissolution of Parliament. That brings us up to Friday October 25th. UK general elections generally take place on a Thursday meaning the first Thursday available is Brexit day itself, October 31st.

The UK could break with tradition and have the election on another day. However, the date for the election is in effect set by the prime minister who advises the queen on what date to schedule the election in her crown proclamation. In other words, Johnson will be free to set a polling date later than October 31st, meaning that Brexit would already have occurred by the time voters get to have their say.

The EU cannot grant a further extension of article 50 without a request from the UK government so Johnson can sit on his hands and refuse to request a dissolution during the period in which parliament is dissolved thus letting a no-deal occur automatically on October 31st.

This is very important as, legally once Brexit takes place, reversing it is like trying to unfry an egg. Once the UK has actually left the EU, article 50 can no longer be used to make a deal as it covers only the departure of a current member state. After Brexit, any deal will legally be one between the EU and a non-member state. While article 50 agreements need only to be supported by a weighted majority of states voting in the European Council, a post-Brexit deal will need to be ratified by the parliaments of all 27 states.

Would Boris Johnson dare to cut the British people out of the decision by holding an election too late to let them express their view? The polls suggest that he would not pay a price for doing so. Under the UK’s “first past the post” system, you don’t need a majority of voters to win and the minority who favour a no-deal exit is large enough to beat a splintered opposition.

A recent ComRes poll shows that in an election held after the UK has left with no deal, the Conservatives are likely win a majority in parliament with 36 per cent ahead of Labour 29 per cent, Liberals 15 per cent and the Brexit Party on 8 per cent. However, if the election happens after the UK has received an extension of article 50, Labour wins with 28 per cent followed by the Brexit Party on 23 per cent with the Tories and Liberals trailing on 22 per cent and 16 per cent. In other words, uniting the pro-no-deal Brexit minority by exiting before an election would benefit Johnson electorally.

Is there any way to stop this? The opposition could use the 14-day period between the passing of a motion of no confidence and the dissolution of parliament to vote in a neutral caretaker prime minister who would request an extension from the European Council and immediately call an election.

This would require agreement between the opposition parties and Tory rebels in favour of an agreed candidate. This is where Fintan O’Toole’s suggestion that Sinn Féin allow their seven MPs to be replaced, via byelection, with MPs who would attend Westminster comes into play.

Seven additional votes would be useful but, overall, it is the attitude of the 247 Labour MPs that is likely to be decisive. Some Labour figures have indicated they would not vote for someone who was not Jeremy Corbyn. There is also the risk that some pro-Brexit Labour MPs would refuse to co-operate in order to ensure that Brexit takes place.

Therefore, although the no-deal option is rejected by most voters and by most MPs, British law means it will be exceedingly difficult to prevent Boris Johnson from bringing it about if he is determined to do so. What is more, the British electoral system is unlikely to punish him for refusing to head the anti-no-deal majority. What an outcome for democracy.

1 Nine more deaths from Covid-19 recorded in Ireland along with 24 new cases
2 Hundreds protest outside US embassy in Dublin over George Floyd death
3 Donald Trump’s political success is based on racism
4 Why you still can’t have a European holiday this summer. Or can you?
5 David McWilliams: We won't have another 1980s-style recession
Real news has value SUBSCRIBE