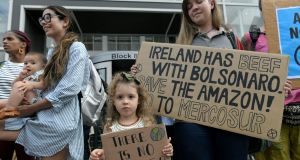 Lottie Groenland (4) and her mother, Rosa Groenland, at the Extinction Rebellion protest at the Brazilian Embassy in Dublin. Photograph: Bryan Meade

Taoiseach Leo Varadkar and Irish EU commissioner Phil Hogan may be on a collision course over the controversial Mercosur trade deal with Brazil and three other South American countries.

Mr Varadkar has warned that Ireland will vote against the deal unless Brazil does more to prevent destructive wildfires in the Amazon rainforest.

The deal was brokered between the EU and Brazil, Argentina, Paraguay and Uruguay and will lead to substantial reductions in tariffs on trade between the two blocs.

Mercosur will allow a significant increase in beef imports from those countries to the EU, a development that has led to angry opposition from farmers in Ireland and other member states.

Mr Hogan, the Commissioner for Agriculture, was nominated for a second five-year term by Mr Varadkar earlier this summer. He has strongly defended the deal since it was struck and and downplayed its impact on agriculture.

He has insisted that 100 per cent of the beef from Mercosur countries entering the EU will be checked to ensure it complies with its standards. He has also argued there are strong safeguarding mechanisms in place to prevent the market being flooded by cheaper imports from South America.

He continued to defend the deal as recently as Thursday, just hours before Mr Varadkar issued a statement expressing concern over wildfires ravaging the Amazon. Mr Hogan told the Thomas D’Arcy McGee summer school in Co Louth on Thursday that negotiations between the EU and the Mercosur countries had been ongoing for 20 years.

On Friday, French president Emmanuel Macron also indicated France may oppose the deal if the fires and environmental damage in Brazil’s rainforests are not curbed.

He was speaking ahead of this weekend’s G7 summit in Biarritz, which will have a primary focus on climate and the environment.

In his statement, Mr Varadkar criticised Brazil’s president, Jair Bolsonaro, for claiming environmental groups were deliberately setting fires in the forest to make him look bad. These comments were described by the Taoiseach as “Orwellian”.

For his part, Mr Bolsonaro has accused European countries of interference in his country’s internal affairs.

Fianna Fáil spokesman on climate action and environment Timmy Dooley said the change of position by Mr Varadkar was long overdue as he had defended the deal until now.

“After two months of silence, the Taoiseach appears to have finally grasped the extreme risks and climate impacts of the Mercosur deal.

“What we have seen is an alarming absence of leadership. It seems the Taoiseach only responded adequately when the United Nations, president Macron and others had taken a strong line with the Brazilian government, given the escalating destruction of the rainforest,” he said.

Green Party leader Eamon Ryan took part in a protest over Mr Bolsonaro’s environmental policies outside the Brazilian embassy in Dublin on Friday.

In a tweet, he said the Government and the EU “should be sending an ultimatum to the Brazilian government, that they must stop destroying the Amazon rainforest or else forfeit any chance of a Mercosur trade deal”.

People Before Profit TD Bríd Smith called on the Brazilian ambassador to Ireland, Eliana Zugaib, to appear in front of the Oireachtas committee on Climate Action to answer questions about the Amazon fires. Ms Smith described Mr Bolsonaro’s environmental policies as “dangerous” and “destructive”.