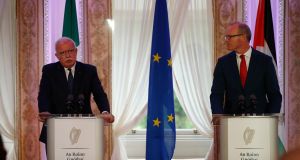 Ireland may recognise a Palestinian state if peace talks with Israel aimed at producing a two-state solution in the region continue to stagnate.

Minister for Foreign Affairs Simon Coveney said Ireland has already committed to recognising a Palestinian state as part of a peace process. However, if negotiations between Palestine and Israel continue to prove fruitless “we may have to forget the second part of that.” He speculated other European countries would take a similar position.

The delegation is on its way to New York where Mr Abbas will speak at the United Nations General Assembly. The core of his address will be a need for the international community to rescue the a two-state solution to Israeli-Palestinian conflict or abandon it altogether.

More than 170 Palestinians have been killed by Israeli forces since the latest round of clashes in the region began in March.

Mr Coveney’s willingness to recognise a Palestinian state if talks continue to falter goes a step beyond the Fine Gaelcommitment on recognition as part of a peace process.

“We have made a choice not to officially recognise the state of Palestine just yet,” said the Minister. “But if this hopelessness continues in terms of the dialogue working we will be forced to review that for obvious reasons, as I think a lot of other countries in Europe will too.”

He also announced the Government is considering hosting a meeting in Ireland between leaders of Arab and European countries and Palestinian representatives in a bid to restart the stalled peace process.

Ireland will also increase its funding to the United Nations Relief and Works Agency for Palestine Refugees from €4.5 million to €7 million this year to help plug the gap left by the Trump administration’s decision to pull $200 million in funding from the agency. Mr Coveney called the US decision “a mistake”.

The potential meeting was welcomed by Mr al-Maliki as a way for allowing “the international community to take up its own responsibility to seek action when it comes to Palestinian-Israeli peace process”.

Asked if he believes Israel is moving towards imposing an apartheid-style regime in Palestinian territories, Mr Coveney replied that it is not difficult to find examples of injustice in the region.

“We have an occupation of the Palestinian territories,” he said. And while that occupation is taking place we are seeing an expansion of Israeli settlements on to Palestinian lands. In our view that is illegal.”

He also noted the demolition of Palestinian homes by Israeli forces, including the planned destruction of the Bedouin community of Khan al-Ahmar in West Bank.

Mr Coveney criticised the closing of the office of Palestinian Liberation Organisation office in Washington DC by the Trump administration.

“We need sustained dialogue if we are to make a breakthrough in the Middle East peace Process. We believe that shutting down channels of communications is never a good idea.”