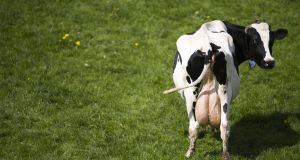 Minister for Agriculture Michael Creed has dismissed criticisms of his department’s record on climate change, describing the Irish dairy sector as the “most carbon-efficient on the planet”.

Making a robust defence of how the Government has tackled increasing carbon emissions, Mr Creed said that those who claimed the Government was doing nothing were doing a huge “disservice” to the sector.

He also firmly rejected any suggestion that Ireland should dismantle production or reduce the national herd.

It is now certain that Ireland will come nowhere near meeting its EU target of a reduction of 20 per cent of greenhouse emissions by 2020 compared with 2005 figures.

Agriculture accounts for a third of the State’s emissions. While not rising as steeply as transport and energy in recent years, emissions have not fallen and agriculture remains by far the biggest sectoral emitter.

The Government’s current policy is to grow Irish agricultural, the national dairy herd and the volume of food production, principally through the Harvest 2020 and Foodwise 2025 strategies. But critics claim it is inimical to the Paris Agreement, the Government’s own climate-change legislation and EU targets, all of which commit Ireland to reducing emissions.

Much as his predecessor Simon Coveney did, Mr Creed has essentially argued that Irish agriculture is a special case, partly because of its importance to the economy, partly because of the Government argument that – notwithstanding its high emissions – it produces food more sustainably than just about any other country. The primary reason for this, it is argued, is that Ireland is one of the few States globally with green pastures and moderate climate that allow animals remain outdoors throughout the year.

Mr Creed said the focus on and criticism of agriculture comprising a third of all emissions – and the accompanying arguments that production should be reduced – represented an “unfair and ill-informed measurement”.

“It’s a bit of a slight on the industry who have shown a willingness to embrace the climate change agenda.”

He insisted that the industry is sustainable from a climate-change perspective.

“We have broken the link between a growth in production and an inexorable rise in our carbon footprint.

“Our production has grown but not our carbon. We want to grow the sector in a sustainable way in Foodwise 2025.

“It’s also in our economic interest to do it that way. In global markets, it’s now a given that you have safe, traceable, nutritious food.

“Bord Bia is finding that high-end consumers are increasingly looking for the provenance and sustainability and animal-welfare side.”

He points to the Bord Bia Origin Green concept, saying that 60,000 farmers now participate in carbon audits every 18 months.

He said it was not an idle boast and that the EU’s joint research centre had accepted Ireland was “the most carbon-efficient producer of milk on the planet”.

He said the Government had spent large sums of money to ensure farmers drove down their carbon inputs, managed resources, dealt with the nitrate directive and made more efficient use of fertilisers.

He also said that the beef data and genomics programme – which will cost €300 million over the lifetime of the Government – allow genetic profiling of the beef herd on 52,000 farms.

“It will address fertility. If a suckler cow only goes into calf every 20 months, that’s less carbon-efficient.

“We are the biggest exporter of beef in the northern hemisphere . . . We want to be able to say that we are doing it efficiently and sustainably.”

At the core of the argument made by Mr Creed and his colleagues in Government is that if Ireland were forced to reduce production, that shortfall would be taken up by less sustainable and less efficient producers elsewhere. But failing to make any dent in agricultural emissions figures (albeit with production increasing) will cause political difficulties with the EU.

“The problem with agriculture is that there is no single solution,” said Mr Creed. “There is a need for a whole host of measures to drive down emissions.”