Abolishing flat-rate fees could be bigger issue than water charges 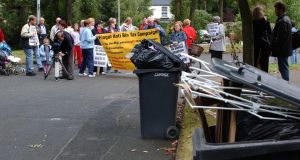 Lohunda Crescent in Clonsilla, Dublin in 2003 when residents blocked a bin lorry into their estate in protest against bin charges. Photograph by Frank Miller

He warned his Fine Gael parliamentary party on Wednesday evening that this had the potential to become a “big issue”.

Having spent his first two weeks in office fighting fires on issues relating to the judiciary, Mr Varadkar reminded his TDs and Senators that the introduction of bin charges was the issue they would have to defend on the doorsteps.

Many of his party had not yet fully examined the new proposals spearheaded by Minister for Communications Denis Naughten.

But those who had were not best impressed. Carlow TD Pat Deering said he was not convinced of their merit.

Another Fine Gael TD told The Irish Times, “This has the potential to be worse than the water charges debate. It is primarily an issue for those living in urban areas and those who have no control over their waste.

“They will be bringing used nappies to our clinics or leaving them at the offices.”

The issue has the potential to spiral into another crisis for an already bruised and battered Government.

Fine Gael had paid a hefty political price for the imposition of water charges. They are acutely conscious that they cannot repeat the mistakes of the past.

Mr Varadkar should foresee the potential for a co-ordinated campaign by a resurgent hard-right buoyed by the decision to acquit six of the Jobstown protestors.

Politically the Government is facing two private members’ motions in the Dáil next week from Fianna Fáil and Sinn Féin seeking changes to a system announced 72 hours ago.

The proposals will allow for the abolishing of a flat-rate fee imposed on householders by some waste companies. Instead, homeowners would have the option of paying by lift or paying by weight.

This gave rise to fears of exorbitant prices for consumers and led to accusations that waste companies would have carte-blanche to impose whatever charges they saw fit.

While all parties accept action needs to be taken to reduce the amount of waste being sent to landfill, it seems most are at odds about how to do it.

Fianna Fáil TD Timmy Dooley said his party was deeply concerned by the lack of regulation in the waste sector and insisted on the need for a regulator to be established before any changes to the system could proceed.

Sinn Féin’s John Brady believed there was a sizeable portion of the population who would suffer unnecessarily by the measures.

He pointed to those with medical conditions and disabilities, large families and low-income households and claimed they would suffer financially as a result of this.

Mr Naughten told The Irish Times there would be a phased withdrawal of the flat-rate charge over the next 12 months. The space would give families an opportunity to explore what options best suit them, the Minister said.

“An average family in Ireland throws away €700 worth of food waste every year and shockingly we have dead animals ending up in black bins and recycling bins.

“We have a situation in this country where landfills are filling up rapidly so we have to manage the waste that we produce in our homes and how we separate recycling, organic and residual waste. If we don’t, as a country, there will be nowhere for our waste to go.

“On two occasions last year we were within hours of a situation where no bins would be collected as there was no landfill to bring it to. Emergency powers had to be invoked to ensure that waste continued to be collected.”

Doing nothing was not an option, he added. “As Minister it would be inexcusable for me to stand by, do nothing and allow a situation to develop where household bins will be left on our streets uncollected because there is nowhere to bring the waste to.”

The Minister may be right but politically the imposition of revised or reformed charges may be too big a gamble for a minority Government to take.

It is acutely aware of the damage the water charges inflicted on a stable coalition.

A Government held together by Fianna Fáil, a party with one eye on the next election, may not live to tell the tale.