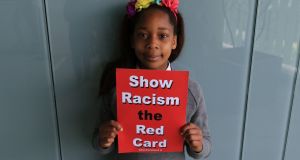 Ireland has a disturbing problem with racism and discrimination against migrants that must be meaningfully debated, the head of the European Union’s human rights agency has warned.

More than 6,000 migrants were interviewed for the research report, Being Black in the EU, across 12 member states, including a significant number in Ireland.

On average, less than one in 10 immigrants said they had faced discrimination at work because of their background, but in Ireland 17 per cent said they had suffered, said Mr O’Flaherty.

Nearly a quarter of all those surveyed said they had been harassed, but, again, the figure in Ireland was substantially ahead, at 38 per cent. Three per cent had suffered racist violence. In Ireland, 8 per cent said they had.

Mr O’Flaherty said: “What it shows is worrying patterns of racism and that they’re a bit worse in some countries as opposed to others and Ireland is one of the countries that come out worse, frankly.”

However, two-thirds of immigrants in Ireland feel able to complain if they are badly treated, compared with just 38 per cent who feel able to do so across the European Union.

This, he said, which shows that “the Irish Equality and Human Rights Commission is doing a better job than many in making itself visible and being accessible to people with complaints”.

Gardaí also came out well in the survey. “People from ethnic minorities [across the EU] tell us they are subject to a disproportionate number of police stops,” Mr O’Flaherty said.

Asked if they were treated with respect by police the EU average for immigrants was 59 per cent, but the result in Ireland is significantly better, coming in at 71 per cent.

Ireland must debate the existence of racist attitudes, said Mr O’Flaherty: “Our figures demonstrate that Ireland has a problem with racism. People who should talk about these issues should be talking about them more.”

However, the Galway-born director declined to speak about the current Oughterard direct-provision centre controversy, though he said there were lessons to be drawn from experience across the EU.

“The sooner we get people out of sheltered accommodation and into housing in the community the better the integration outcomes,” he went on, adding that meaningful consultation with local communities helped greatly.

“Consultation to be effective has to be based on solid information,” he said, adding that EU funds were available to help migrants to integrate but they were rarely drawn down because few people know about them.

Migrants must be trained for jobs and given language lessons on arrival, he said, while politicians must “be very careful not to fan the flames of populism” by uttering statements that are not based on facts.

The majority of people who are arrive in the EU seeking asylum are genuinely “fleeing from fear of persecution”, he said: “This is reflected by numerous figures such as asylum determination proceedings.”

Racism is a real issue in the daily lives of refugees and asylum seekers: “We are not dealing with some abstract problem, we’re dealing with something that’s blighting the lives of people living next door to us.”

Ireland, he said, should be proud of the role played by the Naval Service, which spent a significant period of time in the Mediterranean rescuing “drowning migrants”. “Ireland should be very proud of that,” he said.