Inquiry highlights State failure in oversight of search for Rescue 116 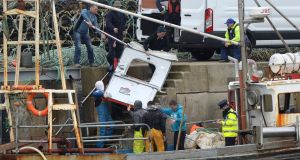 Debris from Rescue 116 is taken from a trawler at Blacksod pier in Co Mayo. Photograph: Dara Mac Dónaill

State agencies have failed to ensure independent oversight of air-sea search-and-rescue operations, according to an interim statement on an Irish Coast Guard helicopter crash which killed four crew.

Inaction by the Department of Transport and the Irish Aviation Authority and weaknesses in flight safety systems by CHC Ireland – an air-sea rescue service contractor to the Coast Guard – are documented in an Air Accident Investigation Unit (AAIU) interim statement, published on Friday.

The unit’s final report into the cause of the Rescue 116 crash which claimed the lives of Dublin-based Coast Guard crew Capt Dara Fitzpatrick, Capt Mark Duffy and winch crew Paul Ormsby and Ciarán Smith off the north Mayo coast on March 13th, 2017, may take some months.

The Sikorsky S-92A aircraft had been assisting in a medical evacuation mission off the west coast when it crashed at Blackrock Island.

A separate joint Garda and Health and Safety Authority inquiry is also continuing.

The AAIU, which had ruled out mechanical fault within a fortnight of the crash, issued a preliminary report last April in which it identified anomalies in flight navigational information and software and a flaw in the installation of locator beacons on crew life jackets. A separate ground-proximity warning system did not have Blackrock Island on its database, the report found.

The interim statement, which was given to the bereaved families before publication yesterday, followed more than 75 hours of interviews with “a large number of personnel from a range of agencies”.

It highlights how an audit in 2010 by the International Civil Aviation Organisation observed that while the IAA had established a “mechanism” for oversight of search-and-rescue co-ordination, the Department of Transport had not established a mechanism to ensure effective oversight was being carried out for “those entities for which it is responsible”.

The statement expresses concern about the “efficacy” of CHC Ireland’s safety management systems and says the company should review them to ensure they are “sufficiently robust”.

The report calls on the Minister for Transport, as the “issuing authority” for the Irish national maritime search-and-rescue framework, to conduct a thorough review of such operations.

It calls on CHC Ireland, with “external input”, to review its safety management systems, and it recommends that Sikorsky Aircraft Corporation update and modify software in the helicopter’s flight data recorder.

It also tracks progress made on its two previous recommendations, which called on CHC to review route guides, and on life jacket manufacturer Beaufort to review installation information for locator beacons.

The report notes the IAA renewed search-and-rescue approval to CHC Ireland on April 25th last year – just over a month after the crash and 12 days after the AAIU’s first report.

Minister for Transport Shane Ross said he had asked his officials to review current oversight arrangements “without delay”.

However, the Irish Airline Pilots’ Association, which says it has been highlighting safety concerns with the IAA for the past decade, is seeking an early meeting with Mr Ross.

CHC Ireland said it was “currently in the process of reviewing” the AAIU report.