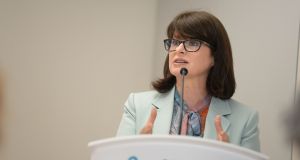 IHREC chief commissioner Emily Logan warned of “a worrying trend that has seen many countries in Europe and further afield” succumb to populism, unilateralism and racism. Photograph: Dara Mac Donaill

Politicians have been warned against making remarks that discriminate against minorities by the State’s equality commission, which is calling for sanctions for those who transgress.

In a critical report on Ireland’s compliance with its UN Human Rights obligations, the Irish Human Rights and Equality Commission (IHREC) raised concerns about the development of a “political discourse in Ireland that may serve to exclude minority groups from public life”.

It points to recent examples which have caused it concern, including presidential candidate Peter Casey’s comment that Travellers are “basically people camping in someone else’s land”, and Galway West TD Noel Grealish’s description of refugees from Africa as “economic migrants” seeking to “sponge off the system here in Ireland”.

In its report, produced for the UN Committee on the Elimination of Racial Discrimination, the IHREC warned “while political debates should be free and open, they should not be characterised by a political discourse that is of a discriminatory and racist nature”.

It argues appropriate countermeasures “include codes of conduct that prohibit the use or endorsement of prejudicial and discriminatory discourse by public officials and elected representatives”.

The codes should “provide for appropriate sanctions for breach of their conditions”. The State should examine the concept of reserving seats in parliament and local government for minority and ethnic groups, and the introduction of a quota system for minority ethnic candidates in party candidate selection.

The IHREC also said rules allowing oversubscribed schools grant preferential access to relations of past pupils should be abolished, arguing these may act as a barrier for children from Traveller and migrant families to accessing education.

IHREC chief commissioner Emily Logan warned “we have witnessed in the past few years a worrying trend that has seen many countries in Europe and further afield succumb to populism, unilateralism, racism and an increasingly narrow and inward-looking vision of statehood, sovereignty and national belonging”.

The report also recommended “dissuasive sanctions” be introduced for local authorities that fail to provide Traveller accommodation, amid underspending of budgets provided for this purpose.

The emergency accommodation of asylum seekers in hotels and guesthouses due to capacity limits in dedicated centres “should cease as soon as possible”, the report said.

It called for the “complete phasing out” of the wider direct provision system, and criticised the operation of centres by private entities.

A Government spokesman pointed to reforms on criminal hate speech, human trafficking, a migrant integration strategy and hate crime legislation it has introduced or plans to pursue, as well as steps taken to encourage more ethnic minorities into the Civil Service.

“The Government is committed to ensuring that Ireland is a safe and secure place for everyone, somewhere that racism and xenophobia will not be tolerated,” the spokesman said.