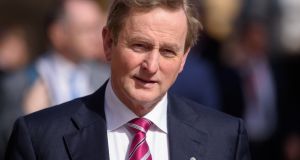 HP Inc announced on Wednesday it is cutting almost 500 jobs at its north Kildare operation over the next 12 months.

In a statement, the company said it was “likely” that close to 500 HP employees will lose their jobs as part of the closure. A small staff will stay on to maintain a local presence in Ireland, it said.

Mr Kenny said the plant could be sold as a going concern and IDA Ireland was actively considering options for alternatives.

“There are many options to be considered now,’’ he said. “It is a fabulous location, a brilliant plant, but, unfortunately, the technology and the product have fallen out of date.’’

He was replying in the Dáil on Wednesday to Fianna Fáil leader Micheál Martin who asked whether new areas of investment were being pursued.

Minister for Housing Simon Coveney said while he had expected some job losses at the plant he did not think it would be “this bad”.

Speaking after HP’s announcement, Mr Coveney said the Government had known there was a global assessment under way at the company which had indicated potential job losses.

“This is really bad news. We need to ensure that all the government and agency support systems are in place,” he told Newstalk’s Pat Kenny Show.

“What is surprising is the loss of 500 jobs. That’s a huge figure for one company.”

Mr Coveney said there is a demand for skilled workers and the State will have to help them transition to new jobs.

Before the announcement, Minister for Public Expenditure and Reform Paschal Donohoe had said the Government and its agencies would do everything to support the community and employees.

“We will support and respond once the company makes its announcement today,” he said on Wednesday.

“We have a track record in attracting high tech employers into the country. Some have left and agencies like Enterprise Ireland and the IDA have had a role to play in protecting jobs,” he told RTÉ’s Morning Ireland.

HP Inc makes ink-jet printer cartridges at the facility and is also involved in research and development and business analytics.

Before the company confirmed the cuts on Wednesday, Social Democrats TD Catherine Murphy called for a meeting with the Department of Jobs, Enterprise and Innovation and four Kildare North TDs .

She did not think the announcement would be a “positive” one, Ms Murphy told RTÉ’s Morning Ireland.

She had hoped the location of the research and development department and the Global Service Desk would minimize potential losses.

“We need to do everything we can to support Hewlett Packard - to see if we can assist if the announcement is negative,” he said on Wednesday morning on Newstalk Breakfast.