Irish farming interests must be kept front and centre at all stages of negotiations, ICSA says 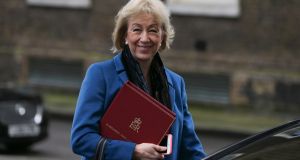 The Irish Cattle and Sheep Association (ICSA) met with UK secretary of state for environment, food and rural affairs Andrea Leadsom at a meeting which took place in the House of Commons on Tuesday tonight . Photograph: Daniel Leal-Olivas/AFP/Getty

The fortunes of Irish and British farmers are intrinsically linked and must be allowed trade with minimum disruption.

The Irish Cattle and Sheep Association (ICSA) met with UK secretary of state for environment, food and rural affairs Andrea Leadsom at a meeting which took place in the House of Commons on Tuesday tonight .

President of the ICSA Patrick Kent said the agricultural ties between the Britain and Ireland are vital and must be protected.

“Both Ireland and the UK need to continue to trade with each other with minimum disruption, with no tariffs and through maintaining the equivalent standards that have been commonly developed over many years,”said Mr Kent.

Mr Kent said Irish farming interests must be kept front and centre at all stages of Brexit negotiations, both from an EU and a UK perspective.

“ICSA is making the case in Brussels and tonight we have had the opportunity to make that case directly to Westminster. Ms Leadsom urged ICSA to keep pressure on the EU so that the unique links between our two countries can be preserved,”he said.

Currently, Ireland exports 50 per cent of the beef we produce to the UK. In 2016 this trade was worth €1.2 billion.

“Irish farmers have already taken a hit as a result of Brexit that cannot be sustained and needs to be reversed. Farmers are at a crossroads regarding farm decisions. At current levels it is just not sustainable at farm gate level. We have to cut production until we have a clearer view of what trade deal will be done between the UK and EU,” he said.

Mr Kent said he also raised concerns with Ms Leadsom about the risk of the UK market being flooded with New Zealand lamb or South American and Canadian beef and sought assurances that this would be limited.

ICSA met with Ms Leadsom and minister of state George Eustice as part of a coalition of British, Northern Ireland, Scottish, Welsh and Irish farming organisations, ‘Fairness for Farmers in Europe.’