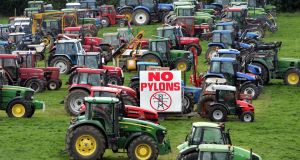 Brexit will have no bearing on the North-South electricity interconnector because it is based on legislation adopted by the Oireachtas and the British parliament, Minister for the Environment Denis Naughten has said.

The project has a projected cost of €286 million with €180 million being incurred in the South and the remaining €106 million in the North.

Mr Naughten will today meet members of anti-pylon groups from Monaghan, Cavan and Meath opposed to the controversial interconnector being constructed overground.

The Minister told Fianna Fáil’s Niamh Smyth that the governance framework for the all-island single electricity market was not based on EU law but on Irish and British legislation,

He added that existing arrangements between Ireland and Britain were based on co-operation and agreement between the two countries “and do not depend on whether Ireland is inside or outside the EU”.

Ms Smyth, a TD for Cavan-Monaghan said Brexit offered an opportunity to either put the project on hold or consider the preferred option of building the interconnector underground.

Her Meath East party colleague Thomas Byrne accused the Minister of being “totally misleading and disingenuous” in saying the interconnector was not connected to Brexit or the EU.

“This is a project of common interest as designated by the European Commission, so it clearly has strong European ties and links, regardless of the legislation.”