How the tide turned against saving the Eighth 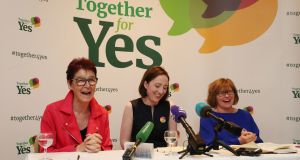 The three co-directors of Together For Yes, from left, Ailbhe Smyth, Grainne Griffin and Orla O’Connor. Photograph: Niall Carson/PA Wire

In the heartland of historical pro-life support in Roscommon and Mayo, Save the 8th campaigners began to sense 10 days ago that the tide had finally turned against them.

“I felt that people were not listening and not prepared to listen. I went home and cried,” says Roscommon canvasser Áine Killian. “Last Sunday I knew the feeling on the ground was not good.”

In her Dublin office, Together for Yes manager Deirdre Duffy was looking at canvass returns: “Our Yeses are going to be better than we predicted. The Don’t Knows have been consistently breaking towards Yes,” she says.

It had not always looked like that. Together for Yes, representing 60 organisations, had formed in late March, facing off against two No groups, the grassroots-focused Save the 8th, and the more national, media-leaning LoveBoth.

The No side was quicker out of the traps. By March they had posters and billboards up including the One in Five claim about UK abortions: “They became huge talking points,” says Niamh Uí Bhriain of Save the 8th.

“I can’t understand where the Yes campaign was for that whole month and a half,” she adds. Like others on the No side, she could not believe that voters would back the Government’s proposals.

As a leading campaigner in Cork, Becky Kealy says: “I think the whole 12 weeks thing, they shot themselves in the foot with that. It’s too extreme for the normal Irish person . . . “

Was Yes slow out of the blocks after its March 22nd launch? No, says Together for Yes co-director Ailbhe Smyth: “We held back deliberately because in an exceedingly long campaign people get exhausted and fatigued.”

If the Yes campaign had then lagged behind, a crowd-funding campaign to raise €50,000 changed the mood dramatically. In a week, half a million was collected.

“That was astounding,” says Together for Yes co-director Orla O’Connor. “We did not expect the volume of donations. It became much more than fundraising. It was an outpouring of women’s feelings on abortion.”

John McGuirk of Save the 8th also realised its significance: “It was very clear in the campaign that that was the ‘oh f**k moment’ for us,” he says. “Up until then we could see no evidence of any enthusiasm on their part.”

By then, the ground war was in full spate. Some 3,000 No canvassers were on the streets. The Yes side was strong in Dublin initially but its numbers increased hugely all over the State as the campaign went on.

Early on, both sides focused on strengths, with No describing the proposal as extreme, while Yes focused on the harm done by the Eighth, helped by women affected telling their stories directly.

Both sides had Achilles’ heels. The No arguments that abortions were not a solution for hard cases went down well with its base, but not with the middle ground.

Likewise, in the early stages, Yes canvassers had difficulty with the 12 weeks, many not really wanting to grasp the nettle on it. Neither seemed to be making headway with undecided voters.

David Quinn from the Life Institute summarised the quandary: “Middle Ireland was homeless. One side wanted total repeal; the other side want total rejection.”

From the start, the No side had argued that politicians could not be trusted. In illustration, Tánaiste Simon Coveney performed an astonishing flip-flop in late March.

Early on, he had said he could not support unrestricted 12-week abortion. He was now saying he did support it, after mature reflection: “Simon Coveney has four distinct positions on abortion,” Uí Bhriain says.

In the longer term, Coveney’s action did not damage. For one, it smoothed any potential for a damaging split between Taoiseach Leo Varadkar and the man who had challenged him for the leadership of Fine Gael.

Meanwhile, the Yes side had a bigger public buy-in from medical professionals. Its star performer was obstetrician Peter Boylan, despite some uncomfortable moments.

“They fought a clever campaign,” says John McGuirk, “Making it about the health of women was very smart and very effective. We spent half the campaign firefighting those battles.”

By mid-April, there were straws in the wind that rural Ireland was not behaving strictly to type. A No rally in traditionally pro-life Mayo attracted only 300 people. Canvass returns elsewhere showed lots of don’t knows and yeses.

On April 20th, the Irish Times Ipsos MRBI poll reported a nine-point drop in support for repeal since the previous January. But Yes still retained a big lead, of 63 per cent to 37 per cent, when adjusted.

On the doorsteps, the Yes side began “to talk about the reality of abortion”, says Orla O’Connor: “For many people this was an uncomfortable conversation.”

Despite some of the claims now being made, the lack of momentum in the Yes campaign had caused worries in late April: “It was still latent. It was not as visible as it should be. That was a moment of intense pressure,” says Duffy.

But then, there was news that 118,000 people were to register on the supplementary register by the deadline of May 8th. The numbers astonished, and they were a boon for Yes.

The No side began to hit obstacles. In quick succession, Facebook announced a ban on foreign funding of ads, and then Google banned all referendum ads. Like others, John McGuirk of Save the 8th was incensed.

RTÉ’s Claire Byrne Show hosted the first debate on May 14th. No campaigner Maria Steen from the Iona Institute performed best, but Peter Boylan came under pressure for the first time.

Meanwhile, the jeering from No supporters in the audience annoyed many viewers. Eight days later, Fine Gael’s Simon Harris bested Sinn Féin’s Peadar Tóibín, in the eyes of most viewers.

Following The Irish Times May 17th poll showing 58 per cent favouring repeal with 42 per cent supporting retention, the No side changed tack, arguing that a referendum for hard cases could be held. The message confused.

The No canvassers did not believe in the message. Reflecting on the contradiction, Cora Sherlock of LoveBoth says: “I can’t be hypocritical and say in a tragic case such as life-limiting cases an abortion should be had.”