Breda O’Brien: Anti-abortion movement has not given up and will not disappear

After a landslide result in favour of 'yes,' Taoiseach Leo Varadkar makes a statement on what this means for Ireland. 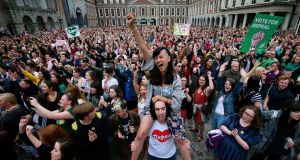 A crowd celebrates the Yes vote at Dublin Castle: “Two-thirds of the electorate voted to remove all rights before birth from the Constitution for the next generation and they did not blink.” Photograph: Nick Bradshaw 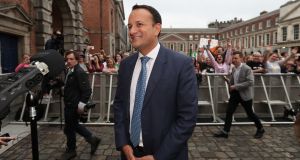 Taoiseach Leo Varadkar at Dublin Castle. “He patronised one-third of the voters with his remark: ‘I would like to reassure you that Ireland is still the same country today as it was before, just a little more tolerant, open and respectful.’ ” Photograph: Niall Carson/PA Wire 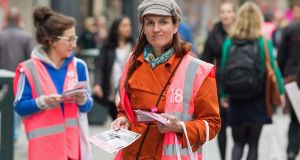 A campaigner with the Love Both anti-abortion campaign canvasses members of the public on Thursday, a day ahead of the referendum on the Eighth Amendment. Photograph: Barry Cronin/AFP/Getty Images

Tom Hesketh wrote an important book called The Second Partitioning of Ireland? The 1983 Abortion Referendum. He explained that in 1983, a fissure had developed in Irish society that concerned far more than abortion. It was an irreconcilable clash of worldviews.

Now, the Eighth Amendment has been replaced by the 36th Amendment in a mirror image of 1983. Two-thirds voted to insert a State-sanctioned right to end human life into the Constitution. One-third voted against.

It is impossible to describe the alienation and horror that most of those 723,632 voters feel about their fellow citizens’ decision to remove the Eighth Amendment and to watch some of them singing and dancing in celebration.

But they have not given up and they will not disappear. The next phase begins now, taking inspiration from countries that have had the profoundly inhumane practice of abortion for decades but still have strong pro-life movements.

The Taoiseach declared: “We are not a divided country.” He then went on to patronise one-third of the voters. “I would like to reassure you that Ireland is still the same country today as it was before, just a little more tolerant, open and respectful.”

But this was the most tone-deaf statement of all. “Today I believe we have voted for the next generation. We have voted to look reality in the eye and we did not blink.”

Ireland has become a different place, not a more tolerant, open and respectful place, but a place with a heart closed to the ones who will die because they are not deemed human enough to be protected.

And a heart closed to the thousands of women who wish they lived in a society that cared enough to tackle the profound injustices such as poverty that force women to choose abortion, rather than proposing the ending of a life instead.

I knew we were in trouble months ago when a prominent journalist said she absolutely accepted the unborn was a baby, but that she felt a woman’s right to choose trumped that fact.

I waited for the outcry. Someone had just said that a baby must die to facilitate an adult’s choice. There was none. I felt an indescribable chill.

The next generation is our hope, not some kind of choice.

Any movement that urges breaking the bond of intergenerational solidarity for ideological reasons, all while abandoning women to the coldness of individual choice, undermines all that is central to our humanity.

Nor did two-thirds of voters seem to understand the concept of equality, instead making ableist arguments. “How could a foetus be the equal of a fully grown woman?” ran the banal, unimaginative and clichéd argument.

They are not equal in cognitive ability, in power or in strength. Neither is a newborn baby or a three-year-old. The helplessness and defencelessness of new humans are designed to instil in us a passion to protect them from harm because they are equal to adults only in their common possession of humanity and their right to life.

Two-thirds of the electorate decided that a woman’s right to choose trumps everything, ignoring the lived experience of women who suffer intense regret after abortion. No compassion and care for them, just a shrug.

There will be no tolerance, openness and respect for doctors, midwives and pharmacists who are viscerally horrified at the idea of destroying human life through chemicals or surgical instruments.

Our Taoiseach quoted Maya Angelou in support of this travesty pretending to be social justice. For the third of voters who choose to care for both mother and baby, I will quote from Dr Mildred Jefferson instead.

Growing up in the Jim Crow South, Mildred Jefferson fought against racism and sexism to become the first black woman to graduate from Harvard Medical School in 1951 and the first woman of any race to intern in Boston City Hospital.

She said of abortion, “I am at once a physician, a citizen and a woman, and I am not willing to stand aside and allow this concept of expendable human lives to turn this great land of ours into just another exclusive reservation where only the perfect, the privileged and the planned have the right to live.”

I am so proud of everyone who gave everything to defend the life-saving Eighth Amendment.

The resistance begins now. I am honoured to count myself among you.

1 The real Contagion virus is out there and it’s causing virologists to worry
2 Man found guilty of murdering girlfriend during drinking session
3 Cork shootings: Father and sons to be buried in two separate funerals
4 Postmortem results on mother and two children found dead in Dublin due on Friday
5 Five lessons of Stoicism: What I learned from living for a week as a Stoic
Real news has value SUBSCRIBE