The 10 key campaign moments on the road to repeal 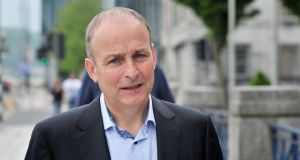 Micheál Martin says in the Dáil in January he will support repeal and the 12-week proposal. Hugely significant statement from the leader of a socially conservative party.

Save the 8th and Love Both display posters and billboards throughout the State in March. The messages are provocative: they say one in five babies in UK are aborted and 90 per cent of Down syndrome babies. The facts are disputed but they set the agenda.

Simon Coveney announces a U-turn in late March and says he will back the 12-week proposal. He faces short-term ridicule but it helps prevent any tensions between him and Taoiseach Leo Varadkar on the issue.

On April, 20th, The Irish Times Ipsos MRBI poll is published. It shows Yes support has fallen by nine points but still retains a big lead, 63 per cent to 37 per cent, when adjusted.

In early May, Facebook and Google announce bans on referendum advertising. It is seen as a big blow to the No campaign.

By the May 8th deadline for the supplementary register, almost 120,000 voters have registered. This enormous figure indicates the level of interest in the referendum and clearly advantages the Yes side.

The first of the big TV debates takes place on May 11th on Claire Byrne Live. Maria Steen performs really strongly for the No side but there is criticism about audience jeering.

In the second Irish Times poll, the gap has closed a little more but the Yes side still leads by 58 per cent to 42 per cent.

The second TV debate on RTÉ sees Simon Harris outperform Peadar Tóibín. The Yes side is also seen to have marginally won the last debate on TV3 the following night.

On polling day – Friday, May 25th – turnout is extraordinarily high, indicating an advantage for the Yes side. The Irish Times exit poll that night indicates that the Yes side is going to win by a landslide.