Mary Lou sets out her SF agenda: ‘Opportunities for all, not just the few’

Deputy political editor of the Irish Times, Fiach Kelly, looks at Mary Lou Mc Donald's first speech as president of Sinn Fein and the challenges that lie ahead for her north and south of the border. 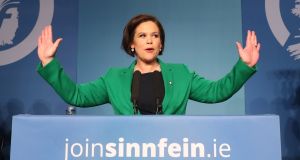 Mary Lou McDonald acknowledges the applause of delegates as she is elected Sinn Féin president at the party’s ardfheis at the RDS in Dublin. Photograph: Niall Carson/PA Wire

New Sinn Féin leader Mary Lou McDonald has said she wants an “Ireland that creates opportunities for all – and not just for the few”.

In her opening address as Sinn Féin leader, Ms McDonald said she wants to see the party in government in Northern Ireland and in the Republic.

She wants to modernise and adapt the party’s “approaches and structures” as it seeks to expand further.

The speech concluded a special ardfheis in Dublin’s RDS, attended by about 2,000 people, which saw Ms McDonald, a TD for Dublin Central, formally succeed Gerry Adams.

She described her unopposed elevation to the leadership of Sinn Féin – which she described as Ireland’s “oldest and greatest political party” – as generational change, but insisted it was “no coronation”.

We must build a prosperous, united Ireland. An Ireland in which people have decent work, fair play and secure contracts

Ms McDonald’s first leader’s address saw her outline some of her own priorities for the party, although a number of details will not be fleshed out for a number of weeks and months.

On the referendum on the Eighth Amendment to the Constitution, Ms McDonald said Sinn Féin will “campaign enthusiastically for repeal”. There was no firm indication yet, however, that she will move to change Sinn Féin policy to one in favour of allowing for abortion without restrictions in the first 12 weeks of pregnancy, as legislation from the Government will propose as the basis for a new abortion regime.

“The referendum debate is about public health, women’s health and our right to decide on these matters for herself,” she said, adding that some of those who will disagree with the party’s position will be “republicans, friends and family”.

Sinn Féin policy currently favours abortion in case of rape, incest, fatal foetal abnormalities and where the health and mental health of the mother is at risk. The party will have to hold another ardfheis to change policy, and it expected Ms McDonald will do so.

On her own leadership, Ms McDonald she wants “what every parent wants”. “For our children to be happy, to fulfil their dreams and potentials, to never be held back by inequality, disadvantage and discrimination.

“To those for whom prosperity is a far-off pipe dream. To those who struggle no after how early they get up, how hard they try, no matter how hard they work.”

Despite Ms McDonald’s commitment to modernise the party, there was no detail on how she will tackle recent controversies that have led to a spate of resignation of councillors.

It is expected, however, that she will initiate a root-and-branch review of Sinn Féin structures, and will spell out how this will be conducted in the coming weeks.

The European project has the potential to transform the lives of citizens for the better, but it can only do so if the social agenda becomes its driving force

On Northern Ireland, Ms McDonald referenced the ongoing talks to restore the Stormont Executive and said: “Sinn Féin is up for a deal. We are committed to real powersharing, to working for agreement with our unionist partners.

“We want the Executive up and running. This can only happen on the basis of equality, respect and integrity for all.”

She said she wants to build on reconciliation in Northern Ireland. “The war is over. There is no value in engaging in the blame game. We do not have to agree on the past. There is no single historical narrative. We must only agree that they past is never again repeated.”

She repeated Sinn Féin’s opposition to a hard border after Brexit and struck a warmer tone towards the European Union than the party has taken in the past, repeatedly referring to the “European project”.

“The European project has the potential to transform the lives of citizens for the better, but it can only do so if the social agenda becomes its driving force.

“Ireland is an ancient European nation, and we will not concede the European project to free marketeers and corporate interests, no more than we would concede our future to Brexiteers and little Englanders.”