DUP candidate for East Derry knows the benefits of publicity 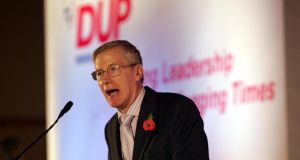 After years of being beaten by John Hume, Gregory Campbell knows it pays to stick with it. Photograph: Eric Luke

Some nationalists have a very hard view of Gregory Campbell, outgoing MP for East Derry, or East Londonderry as he always will say, considering him to be a bit of an anti-Irish ogre.

But no, he says, he is not like that at all: “I am a great believer that in politics people do suffer from caricatures. I am not immune to that caricature.

He is misunderstood. But equally Campbell is long enough in the profession to know that a slightly cartoonish perception of a politician can have its benefits.

For instance, politicians are on to a sure thing if they have a catchphrase to bring to the doorsteps. No prizes for guessing which one is Campbell’s.

On all canvasses in East Derry and much to his satisfaction, Campbell will hear references to “Curry my yogurt, a can coca coalyer”, his now famous or notorious take in the Assembly chamber on “Go raibh maith agat, a Ceann Comhairle”. 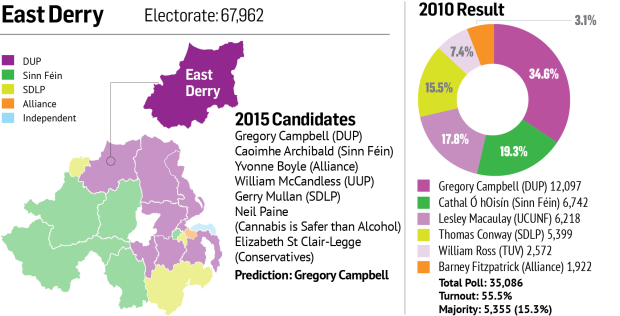 Even before the election campaign began, his remarks had given him a headstart on the opposition, as they generated enormous publicity. There was a period when he appeared to hog BBC Radio Ulster’s Stephen Nolan Show – billed as “the biggest show in the country” – due to the language controversy. Indeed, some were wondering if Nolan was his undeclared director of elections.

There was a crafty premeditation to Campbell’s jibe. At the DUP conference he went on the offensive again, producing a tub of yogurt and telling Sinn Féin it would never get an Irish language Act. This resulted in Gerry Adams characterising unionists as “bastards” and Sinn Féin MP Michelle Gildernew calling Campbell a “b*llocks” – which caused both rivals some embarrassment.

Campbell unashamedly says that he was delighted with the reaction, especially from Sinn Féin. “That was a gift. I set a bear trap and they went straight into it.”

Last month, Campbell was censured again when he let out two very long and loud yawns in the Assembly when Sinn Féin’s Caitríona Ruane was speaking in Irish. That triggered some publicity but not nearly as much as was stoked by his curried yogurt taunt. Somebody must have got word to the BBC that he had milked this issue.

“I just don’t see the point at every single opportunity for Sinn Féin and for one or two others to use Irish, no matter what the topic is. If I did it as often as they did it, starting every conversation with [Ulster Scots greeting] ‘Fair fa ye’, at some point after the 187th time of doing it, somebody across the chamber would say, ‘Gregory would you get a life?’.

“That’s exactly how I feel about those who abuse the Irish language like that. But those who simply want to learn Irish and avail of it and use it in everyday speech I have no difficulty with whatsoever.

“Indeed I was pleasantly surprised by the number of people from the South who wrote to me complaining about the people who were complaining about me.” One Irish language teacher wrote to tell him he “laughed out loud” when he heard the gag and that he should be reassured that not everybody was “as po-faced” as those who took offence.

Then the DUP shifted him east to take on Willie Ross, the then Ulster Unionist MP in East Derry. After two elections – in 1997 and 2001 – Ross was toast and Campbell was the new MP, a position he is likely to continue to hold after May 7th.

Caoimhe Archibald will try to keep the Sinn Féin vote rising; William McCandless will strive to create the conditions so the UUP can win a seat in next year’s Assembly elections. Gerry Mullan will work to ensure the SDLP still has the makings of at least one Assembly seat in East Derry.

Yvonne Boyle and Norfolk native Elizabeth St Clair-Legge, for Alliance and the Tories respectively, will sell the party brands while Neil Paine of Cannabis is Safer than Alcohol will argue the merits of marijuana.

It’s unlikely any of them will get too close to the master of the political wind-up, Gregory Campbell. In East Derry it looks very much like Campbell can.