‘We’ve never been an ‘Uno Duce, Una Voce’ party. No doubt we will discuss this again’ 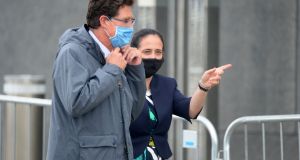 The Green Party has voted against a motion to have co-leaders for the party.

At its national convention - being held online - the motion, which would have resulted in Eamon Ryan and Catherine Martin potentially becoming co-leaders after the next election, fell short of the two-thirds majority required.

The motion was tabled by the party’s two MEPs, Grace O’Sullivan and Ciarán Cuffe, and was supported by 116 delegates in a vote.

A total of 120 delegates voted against in the online ballot.

However, as changes to the party’s Constitution require a two-thirds majority it fell short, even though only a small majority of party members supported the status quo.

Commenting on Twitter after the vote, Mr Cuffe said he was disappointed the motion did not pass.

“We’ve never been an ‘Uno Duce, Una Voce’ party. No doubt we will discuss this again.”

Ms O’Sullivan said she would could continue to campaign on this issue and would look to table more inclusive motions at next year’s convention.

At an earlier session on the health services the finance spokeswoman Neasa Hourigan argued the party should “seize the moment” to allocate funding in the upcoming budget for mental health, disability and maternal care.

Referring to how the circumstances in the wake of the Second World War had led to the establishment of the National Health Service in the United Kingdom, she said there was now an opportunity to change the healthcare system and also to improve people’s lives.

The party said 550 members tuned in on Friday to its convention making it the largest attendance to date for the party.

Deputy leader Catherine Martin said she was delighted with the commitment to campaign and canvass in Irish. “Irish is among the most important resources we have in Ireland,” said Ms Martin.