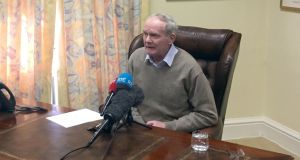 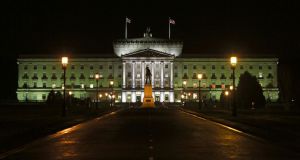 Despite the planned talks in Belfast both the Irish and British governments believe there is little realistic chance Stormont elections can be avoided. Photograph: Paul Faith/AFP/Getty Images

A last-ditch round of meetings will take place in Belfast on Thursday between Northern Ireland’s political parties, Minister for Foreign Affairs Charlie Flanagan and Northern Secretary James Brokenshire in a bid to avert Stormont Assembly elections.

However, both the Irish and British governments believe there is little realistic chance elections can be avoided, according to senior figures in both administrations.

Sinn Féin has said it will not nominate a replacement, which makes Assembly elections inevitable.

Sinn Féin has declined to say if Mr McGuinness will be a candidate in the expected elections. The Irish Times understands Mr McGuinness has been diagnosed with a rare genetic disorder called hereditary ATTR amyloidosis, which affects the nervous system and the heart to varying extents. A particular form of the disease, known as ATTR T60A (or Thr60AIa) amyloidosis has been identified as affecting a small section of the population in Donegal, almost all of whom share a common ancestor. Medical experts say the disease progresses slowly.

Last night, Mr Adams said that while he remained open to discussions with the DUP, he did not see “any basis for credible negotiations this side of an election”.

The Taoiseach urged everyone to seize the chance for last-minute talks to avoid an election. “A limited window for dialogue remains and I am encouraging the parties to engage together to find a way forward that delivers on the promise of the Good Friday Agreement and its institutions.”

However, senior figures in both governments are pessimistic that a breakthrough is possible that could see the executive resuscitated before next Monday’s 5pm deadline. Earlier, Mr Brokenshire indicated that he had accepted that elections were inevitable.

Sinn Féin urged him to call elections as soon as possible, telling him the party would not be nominating an Assembly member to replace Mr McGuinness as deputy first minister before next Monday’s deadline for doing so.

Former SDLP deputy first minister Seamus Mallon has called for an investigation into “corruption” in the Executive, which has been there, he alleged, “right down this last 10 or 12 years”.