Martin McGuinness has announced that he is resigning as Deputy First Minister over the refusal of Arlene Foster to step aside in the “cash for ash” row. Video: Reuters 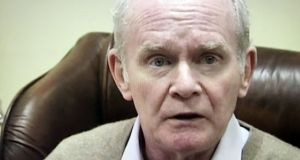 The disease for which former deputy first minister Martin McGuinness is receiving treatment, amyloidosis, is a group of rare conditions caused by deposits of abnormal protein – amyloid – in tissues and organs throughout the body.

There are around 30 different proteins that can misfold and form amyloid, and therefore many different types of amyloidosis.

Most occur as rare complications of blood or inflammatory conditions, but up to 10 per cent of cases are inherited. One hereditary form, ATTR amyloidosis, is an inherited genetic disease that affects the nervous system and the heart to varying extents.

One variant of ATTR amyloidosis, known as ATTR T60A (or Thr60AIa), was first identified in an Irish family in 1986. A cluster of cases have been since identified in Co Donegal, where up to 1 per cent of the population are estimated to possess the mutation.

Affected patients have a 50 per cent chance of passing the genetic susceptibility on to their children, though carrying the mutation does not necessarily mean a person will develop the condition.

Until recently, many people with ATTR amyloidosis were misdiagnosed as having heart disease due to other, more common, symptoms such as high blood pressure.

A 1995 study of the Donegal cases found that nearly all those affected were descended from a person with the common ancestral surname. “The original family with this name was descended from a man called Conall Gulban, after whom the county Donegal (previously known in Gaelic as Tír Chonall, meaning land of Conall) is named.”

The deposition of proteins that occurs with amyloidosis can cause tissues or organs to stop working properly. The deposits are formed when normally soluble body proteins clump together and remain in the tissues rather than being safely cleared away.

While some standard heart failure medicines can worsen symptoms, simple measures such as limiting fluid intake and diet management can be beneficial.

Patients with hereditary ATTR T60A amyloidosis can expect to survive for over six years after the start of symptoms, according to experts at the Royal Free Hospital in London.

Genetic testing in a healthy person without symptoms can provide information on whether the mutation is present, but cannot predict whether the person will go on to develop amyloidosis.

In the UK, about 1,000 people a year are diagnosed with amyloidosis, but only a few dozen of these have the T60A variant. The national amyloidosis centre at the Royal Free Hospital has for many years treated patients from the Republic and Northern Ireland.

No research on impact of fake news on vaccine uptake, conference told