‘I sincerely apologise for my language. It is absolutely not what I meant to say’ 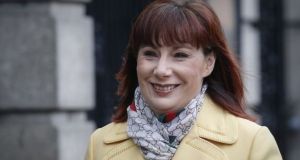 Minister of State with responsibility for Special Education Josepha Madigan has on Thursday apologised over comments describing children who do not have additional education needs as “normal”.

Earlier on Thursday, the Government announced it would reopen special schools and primary classes for children with additional needs from next Thursday, January 21st.

The decision followed meetings between school staff unions and the Department of Education, and was welcomed by disability advocacy organisations.

But speaking about the reopening of special schools in the Dáil, Ms Madigan said: “We all know that even for normal children remote teaching is difficult, but for children who have additional needs it is particularly difficult.”

Her description of children without additional needs as “normal” was immediately criticised on social media.

“I sincerely apologise for my language. It is absolutely not what I meant to say,” Ms Madigan later said in a post on Twitter.

Ms Madigan’s apology came in response to a tweet from Andy Pike, head of education at the Forsa trade union, who said: “There are no normal or abnormal children. There are just children. All of whom are different and some have additional needs. Hope the Minister will clarify her statement.”

Ms Madigan concluded her response to Mr Pike by saying: “Looking forward to continued co-operation into the future”.

Earlier, when she spoke in the Dáil, Ms Madigan said the Covid-19 pandemic “tore up many of our best laid plans” to a certain extent.

“Anyway, it is a positive development today because we will see special schools - they are the schools with the children who have the most severe and complex needs - reopen next Thursday. There are ongoing discussions in terms of the logistics and practicalities that need to be worked out. All the resources will be given to special classes children in mainstream as well as in special schools so that they can reopen successfully with essential workers and continue.”

She had been responding to Fine Gael TD Emer Higgins who said: “We are the only First World country in the entire globe in which special schools are closed at this time. Ireland is the only country whose special needs children were caught up in a stalemate with unions. It has been utterly heartbreaking listening to parents of special needs children this week.”