Mumbai, New Zealand and Jordan among new diplomatic missions to be established 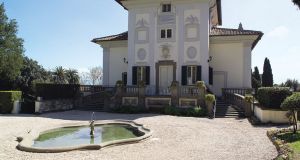 The Villa Spada, the Irish embassy in Rome. Derek Hannon is to replace Emma Madigan as teh new ambassador to the Holy See in the Vatican.

The Government has agreed a series of ambassadorial appointments, finalising a round of changes in Ireland’s diplomatic representation around the world.

The Cabinet has approved the appointment of Aidan Cronin as ambassador to the United Arab Emirates, Olivia Leslie as ambassador to Indonesia and William Carlos as representative in Kampala, capital of Uganda.

Last week’s appointments complete a series of ambassadorial assignments in the Department of Foreign Affairs.

Nuala O’Brien has been appointed ambassador to the Republic of Mozambique, from where she will also be accredited as ambassador to Angola, Madagascar and to the Kingdom of Swaziland. Ms O’Brien was previously senior development specialist at Ireland’s embassy in Hanoi, Vietnam.

Following the retirement of Justin Harman, Jackie O’Halloran has been appointed ambassador to Argentina. The Department of Foreign Affairs confirmed that Ms O’Halloran would also be accredited to three other South American countries – “the Plurinational State of Bolivia, the Republic of Paraguay and the Oriental Republic of Uruguay”, citing the countries’ official names.

Seán Hoy, at present ambassador to Nigeria, has been appointed at the new ambassador to Brazil, replacing Brian Glynn, who is returning to departmental headquarters in Dublin.

Paul Kavanagh has been appointed the new ambassador to Japan. He is currently ambassador to the United Arab Emirates, along with a number of secondary accreditations to other Middle Eastern states.

Tony Cotter, who is currently ambassador to Saudi Arabia, is to be Ireland’s new ambassador to the Kingdom of Thailand. He will also be accredited to Myanmar, replacing Brendan Rogers, who returns to Dublin.

Elsewhere in Asia, Pat Bourne has been appointed ambassador to Singapore, along with three other secondary accreditations – “Brunei Darussalam, the Democratic Republic of Timor Leste and the Republic of the Philippines”.

Gerry Kelly has been appointed consul-general in Mumbai, where he will establish a new mission.

A new mission is also being established in New Zealand, which will be headed by Peter Ryan, at present consul-general in Hong Kong.

Another new mission is to be established in Jordan – the “Hashemite Kingdom of Jordan” – which will be led by Vincent O’Neill, at present ambassador to Kenya in Nairobi.

In Europe, Emer O’Connell has been appointed ambassador to Poland while Frances Kiernan, at present first secretary at headquarters in Dublin is to be ambassador to Estonia, replacing Frank Flood.

Derek Hannon will be the new ambassador to the Holy See in the Vatican, replacing Emma Madigan when she returns to Dublin.

Patrick Duffy has been appointed ambassador to Malta, replacing Pádraig MacCoscair who is also returning to headquarters.