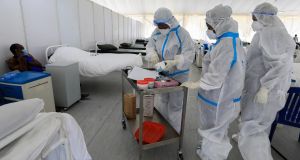 #CoronaBillionaires has been trending on Twitter in Kenya, as citizens complain about what many see as a select number of well-connected companies profiting off the pandemic.

Kenya’s senate has ordered an audit of the billions of Kenyan shillings (tens of millions of euro) that have been spent since the crisis began. Reporting by the Daily Nation newspaper found that some of the companies awarded government contracts weren’t properly registered, while others produced products that weren’t fit for purpose.

The East African country, which declared its first coronavirus case on March 12th, now has more than 24,000 confirmed cases and 399 deaths.

“Money set to cushion the needy during this pandemic hasn’t reached [the] needy, instead it’s reached the pockets of the greedy,” said Kiigen K Koech, one of those who tweeted using the hashtag. The 28-year-old entrepreneur, who says he was the youngest person to run for MP in Kenya’s last election, told The Irish Times that regular citizens are suffering – some who were doing well before the pandemic are now begging to survive.

The country isn’t the only one where officials are facing graft allegations, with anti-corruption campaigners saying tenders given out in crisis situations have less oversight, making misspending more likely.

Zimbabwe’s health minister, Obediah Moyo, was fired in July, after he was accused of illegally awarding a multimillion-dollar contract which inflated the cost of medical equipment. The country now has 4,395 confirmed cases and nearly 100 deaths, including popular journalist and broadcaster Zororo Makamba, who was aged just 30.

In South Africa, outrage over alleged corruption in government tenders has led to President Cyril Ramaphosa setting up a ministerial committee to investigate.

In Uganda, MPs were ordered by the high court to pay back 10 billion Ugandan shillings (€2.2 million) they had allocated to themselves, which worked out at roughly €4,248 each. Back in April, four senior officials in the prime minister’s office were also arrested on charges of inflating the cost of relief food, meant to help Ugandans who were struggling to eat.

Africa has just passed one million confirmed coronavirus cases, with medical experts concerned the real figures could be much higher, given the limited testing available in many countries. Sub-Saharan Africa is also expected to suffer its first recession in 25 years as a result of the pandemic.

Global anti-corruption organisation Transparency International has been tracking which countries have been granted funding or debt relief from the International Monetary Fund, despite not having specific anti-corruption measures in place. The African countries identified are Senegal, Ivory Coast, Ghana, Burkina Faso, Guinea-Bissau and Tunisia.

“Countries will not succeed in their recovery efforts if they don’t also tackle corruption,” the organisation says on its website.