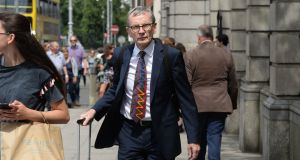 Public health expert Dr Gabriel Scally will provide one final report on reforming the CervicalCheck cancer-screening programme, the Department of Health has said.

A statement from the Department said: “Dr Scally suggested, in his second review report, that he conduct one final progress review at a suitable point sometime after the coronavirus crisis has abated.

“Minister (for Health Stephen) Donnelly is supportive of this and will raise it with the CervicalCheck Steering Committee at the appropriate time.”

He told Labour leader Alan Kelly he would have to look into the issue but said “it hasn’t come before Government in terms of any formal decision”.

Mr Martin said “the Government hasn’t dumped on anybody. But I certainly will check out what process there was and what happened and come back to the deputy”.

Mr Kelly had asked the Taoiseach “why has the Government dumped Dr Gabriel Scally from overseeing implementations and recommendations of the CervicalCheck report that he did”?

The Irish Examiner reported that Dr Scally is no longer involved in providing progress updates to the Department of Health following his investigation of failings in the screening process.

His report made 170 recommendations.

But Mr Kelly said 22 are still to be implemented.

Dr Scally’s report on the service was finished in April 2018 and published by the department in December that year.

The report reviews revelations that hundreds of women had not been informed of an audit of their cervical smear tests after being diagnosed with cancer.

Dr Scally filed several progress reports and reviews after that, the last of which was in 2020.

“I understand the previous minister for health, Simon Harris, actually confirmed to him that he would continue even through this pandemic,” said the Labour leader. He said the CervicalCheck committee which had a meeting in the last few hours knew nothing about this. Mr Kelly said he heard the news in the last couple of days.

“Pathways in relation to CervicalCheck screening have been changed,” he said, adding that some members of the committee believed this move to be “aggressive”.

He asked the Taoiseach: “Will you bring him back? Why was he taken out in the first place? Who made that decision?”

Mr Kelly said that “surely we need to see all the recommendations implemented” from Dr Scally’s report on the CervicalCheck crisis and failings in the cancer screening service.