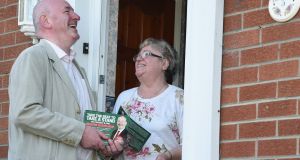 The SDLP’s Mark Durkan shares a light moment with Sarah O’Doherty (81) at her Derry home while out canvassing in the Foyle constituency. Photograph: Trevor McBride

The slogans tell the story in Foyle, where it is a straight race between the “trusted voice” of the SDLP’s Mark Durkan versus the “new voice” of Elisha McCallion of Sinn Féin.

A respected politician who has been the MP for Foyle since 2005, Mr Durkan is sitting on a majority his party’s other MPs – both under pressure in Belfast South and South Down – would envy.

At the last Westminster election, in 2015, he romped home more than 6,000 votes ahead of the Sinn Féin candidate in the SDLP’s birthplace.

But much has changed in the electoral landscape of the North in the intervening two years.

The collapse of the Assembly in January over the controversy surrounding the Renewable Heat Incentive scheme and the subsequent elections in March wiped out the Unionist majority at Stormont and left Sinn Féin only one seat short of the DUP.

In Foyle, Sinn Féin overtook the SDLP for the first time, with Ms McCallion topping the poll. Between them, she and party colleague Raymond McCartney attracted 2,000 first preferences more than the SDLP’s candidates.

“It is clear momentum has been growing behind Sinn Féin in Derry,” says Ms McCallion. “We’re in this race to win it.”

On numbers alone, it would seem she still has a way to go, but Mr Durkan says the SDLP is “not complacent. We’re treating this as a tight fight.”

The Foyle constituency is roughly analogous to Derry City, with a few outlying rural wards, and in the 2011 census was 75 per cent Catholic.

Unsurprisingly, the potential consequences of Brexit and the fear of a so-called hard Border are the major issues in this Border city in which most people have family or business connections to Donegal.

In the referendum on EU membership, 78 per cent voted to remain – one of the highest endorsements of the EU in the UK.

As a member of the Brexit select committee, Mr Durkan argues he is best placed to make Derry’s case in the forthcoming Brexit negotiations.

“Theresa May is the Arlene Foster of this election,” says Mr Durkan, “and what people are telling us on the doorsteps is that people appreciate having an MP who turns up to make their case and fight their corner at Westminster. That’s the best answer to the ‘hard Brexit’ of the Tories and the DUP.”

Yet, Sinn Féin argues its policy of abstentionism – whereby the party does not take its seats in the Westminster chamber – seems to matter less to the electorate than it does to the SDLP, with Sinn Féin taking four seats to the SDLP’s three in the 2015 election.

For Ms McCallion, Sinn Féin’s strength throughout Ireland and its status as the largest nationalist party means that it is, in fact, better placed to represent the constituency in regard to Brexit, the Border, and welfare cuts.

“Voters in Foyle have the chance to send a clear message to Theresa May and her DUP allies that they do not want Brexit, they do not want Tory cuts, and they want Irish unity,” she says. “The people of Derry voted overwhelmingly to reject the Tory Brexit agenda and they now need a new voice to ensure that vote is respected and to demand special status for the North within the EU.”

A popular former mayor, Ms McCallion was only 23 when she was first elected to Derry City Council, and became an MLA earlier this year when she was elected to the seat vacated by the former deputy first minister Martin McGuinness.

Derry is famous as the city of John Hume, but it is also the city of Mr McGuinness, and with his death a few months ago at the age of 66 still fresh in the memory, his legacy is still to the forefront of many voters’ minds.

Ironically, it is the Unionist vote which may ultimately secure the seat in favour of Mr Durkan.

Last time, the DUP’s Gary Middleton polled roughly 4,500 votes, and at least some DUP voters may vote tactically for Mr Durkan to keep Ms McCallion out rather than spend their vote on a candidate that demographics dictate cannot win.

More interesting is the choice facing former UUP voters. Julia Kee polled 1,226 in the last election, but the party has decided not to field a candidate in Foyle this time around.

It remains to be seen whether the SDLP’s recent call for a Border poll on Irish unity will be to the detriment of potential Unionist support.

Alliance has not had the success in Foyle it has achieved elsewhere, and without the name recognition of Eamonn McCann, People Before Profit is unlikely to feature significantly.

If even some of these voters opt for the SDLP, it will likely push Mr Durkan beyond Sinn Féin’s reach.