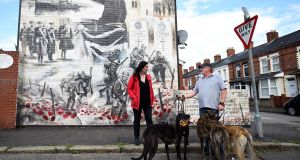 In South Belfast, a stealthy ground war is being fought – particularly by the DUP troops who are being led by a retired political general.

For the DUP candidate Emma Little-Pengelly, it’s a question of head down, knock on the doors, erect the posters and avail of social media while avoiding attention from the regular media and – so the planning goes – get the vote out on Thursday and cause a surprise by dislodging the outgoing SDLP MP Alasdair McDonnell.

One of the reasons South Belfast is so interesting is because former DUP leader and First Minister Peter Robinson has hauled himself out of retirement to drive Ms Little-Pengelly’s campaign.

The 37-year-old barrister – who is married to Richard Pengelly, permanent secretary at the North’s Department of Health – was fast-tracked in her career by Mr Robinson. She served as a special adviser to him when he was First Minister, and in 2015, shortly after she was co-opted as an Assembly member for South Belfast, he made her a junior minister in the Northern Executive.

At the time, Mr Robinson described her as a “tremendous talent”, and now he is back in the political struggle, seeking to propel her into the House of Commons.

In the March Assembly election, Little-Pengelly lost her seat in the constituency, which was reduced from six seats to five. Nonetheless, as Mr Robinson knows, she has a good chance.

Not only is she stalking Mr McDonnell, but two other candidates – former Sinn Féin finance minister Máirtín Ó Muilleoir and the Alliance Party’s Paula Bradshaw, both South Belfast MLAs – believe they too have real prospects of taking the seat.

In the March Assembly election, the DUP polled highest, its two candidates winning 8,975 votes between them, 622 votes ahead of the SDLP’s two candidates. Alliance and Sinn Féin weren’t too far behind, with each respectively on 7,648 and 7,610 votes.

Mr Robinson, a crafty political strategist, will be hoping that two linked factors play in Ms Little-Pengelly’s favour. Firstly, that the Sinn Féin surge of last March will mean that Mr Ó Muilleoir will eat into and reduce some of Mr McDonnell’s vote – the old policy of divide and conquer. And, secondly, that unionists alarmed by the republican surge will be galvanised into voting in higher numbers this time – and voting primarily for Ms Little-Pengelly.

This is why the DUP campaign here has been below the radar. The tactic seems to be to covertly animate unionist voters while hoping that a sufficient number of nationalists will be lulled into a state of such indifference that they will stay at home, thereby handing Ms Little-Pengelly the advantage.

But if Mr Robinson is a canny old dog, so is the politician that Ms Little-Pengelly, Ms Bradshaw and Mr Ó Muilleoir are seeking to unseat. This is 67-year-old Mr McDonnell’s 12th Westminster election. He first contested North Antrim as a 20-year-old in 1970, when he was walloped by the late Ian Paisley.

He acknowledges the threat from Robinson/Little-Pengelly, but says first-past-the-post Westminster elections are a far different beast to proportional-representation Assembly jousts. Mr McDonnell is conscious, too, that he must create the impression among unionist and nationalist voters that this is a head-to-head between the DUP and the SDLP, rather than a four-way tussle.

He says Brexit is a “very, very big issue” in South Belfast, which, he contends, militates against the chances of Ó Muilleoir and Sinn Féin, who won’t sit in the House of Commons. “I have a fairly strong sense that abstentionism is not a winning ticket in South Belfast.”

Also competing here are Clare Bailey for the Greens, Michael Henderson of the Ulster Unionist Party and Clare Salier of the Conservatives. How they fare will also affect the fortunes of the SDLP and DUP candidates.

Mr McDonnell thinks “a handful of votes” will decide South Belfast and is scrapping hard for every one of them. He says he has not lost the energy or cussed ambition that finally got him the seat: “There is spare fuel in the tank yet.”

And maybe just about enough of it to get him over the finishing line first once again.