Catholic bishops in Northern Ireland warn of perils of Brexit 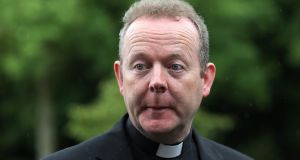 The Catholic bishops in Northern Ireland, while urging people to vote in the June 8th Westminster general election, have warned of the potentially destabilising impact of Brexit.

The bishops also expressed anxiety that prolonged political deadlock “often diminishes trust and confidence in the noble vocation of politics”.

They said in a statement issued ahead of next week’s poll that voters in Northern Ireland had a “moral duty” to weigh up the issues at stake in the election.

“It is regrettable that so many citizens today seem alienated and disheartened by the experience of politics – especially our younger people,” they said.

The bishops said the outcome of the Brexit negotiations led by the British government would have a “profound impact on the social, economic and political future of this part of Ireland”.

“It is vital that the government formed in Westminster following the election is sensitive to the potentially destabilising impact of Brexit on so many aspects of the lives of our citizens here.”

They pointed to a number of social problems in Northern Ireland such as “more than 100,000 children living in poverty” ; schools “experiencing unprecedented financial pressure”; “significant levels of unemployment and low-wage employment”; and deterioration in hospital services.

“While administered by the local assembly, these issues are directly related to funding and other policies that are determined by the government at Westminster,” they said. “It is important that this election gives voice to the particular needs and concerns of this region which for too long has been among the poorest on these islands.”

On abortion and euthanasia they urged voters to concern themselves “with the fundamental dignity and right to life of every person, from conception to natural death”.

The bishops said people might pose a series of questions to candidates before deciding how they would vote.

These included: “How will you and your party best develop the employment opportunities and good housing necessary for individuals and families to lead prosperous and fulfilled lives?

“How will you and your party achieve a more environmentally sustainable society through effective public transport, the promotion of renewable energy and the reduction of waste food and packaging?

“How will you and your party protect and promote the value of every human life from conception until natural death?

“How will you and your party develop an education system that promotes the best outcomes for all young people?

“How will you and your party ensure that the developing Brexit process does not damage our society and ensure that Ireland, North and South, remains an outward-looking country within the community of nations?”

The statement was issued by the Catholic primate, Archbishop Eamon Martin; Bishop of Dromore John McAreavey; Bishop of Down and Connor Noel Treanor; Bishop of Derry Donal McKeown; and Msgr Joseph McGuinness, diocesan administrator of the Diocese of Clogher.