Forming the next government: look who’s talking – and who’s not 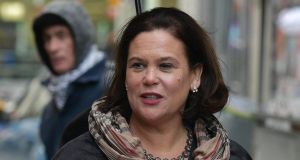 To put together a left-wing government led by Sinn Féin, party leader Mary Lou McDonald would need nearly every Independent TD to be on board. Photograph: Charles McQuillan/Getty Images

Who is talking to whom?

The Sinn Féin leader also met People Before Profit, but not with Solidarity (part of the same group in the Dáil but a separate entity) nor with Rise. Both Rise and Solidarity have one TD each, Paul Murphy and Mick Barry.

The Social Democrats – with their four new TDs to add to its two co-leaders – met to talk to each other and will talk to Sinn Féin, Fianna Fáil, the Greens and Labour, they said.

Actually, it would be easier to list who’s not doing much talking: Fine Gael. Taoiseach and party leader Leo Varadkar said it was up to Sinn Féin in the first instance to see if it could pull together what he called a “socialist republican” government. That means he doesn’t think it’s going to happen. He indicated that Fine Gael could play a role in the future.

Are the talks serious?

Yes and no. The entire process is at an early, necessarily exploratory stage, and no serious government formation business will be done for some time. So to an extent, people are going through the motions. But it suits everyone – Sinn Féin gets to occupy centre stage and command the agenda.

The smaller parties get to emphasise their importance in the process. And Fianna Fáil and Fine Gael get to step back for a bit, lick their wounds and figure out what they’re going to do.

Can these talks produce a government?

Not this phase anyway. The efforts to put together a left-wing government led by Sinn Féin are up against two impediments – political and mathematical.

The chances of forming a government of five parties (Sinn Féin, Solidarity-People Before Profit, Labour, the Greens and the Social Democrats) plus a minimum of 14 Independents of wildly differing political backgrounds seem remote, to say the least.

And that was before Labour announced on Wednesday that it was out. As a consequence of the Labour move, McDonald would need nearly every Independent TD to be on board. That is more or less a political impossibility.

So what are the chances of a taoiseach being elected next week?

Slim to none. The Dáil meets on Thursday, February 20th at noon. After it elects a ceann comhairle to chair the Dáil for the next term, it will hear and vote on nominations for taoiseach.

But there is little expectation that a deal on a programme for government could or would be done within the next week. However, it is quite possible that with some Independent or small-party support, McDonald will get the largest numbers of votes for taoiseach – though considerably fewer than the 80 required to be elected.

The Dáil will adjourn until a date agreed by the House. Normally, it would give itself a few weeks to allow negotiations between the parties in the hope that a programme for government, and a coalition to implement it, would be agreed.

This process will happen in phases. The current preliminary phase will probably demonstrate that – as many politicians on all sides privately acknowledge – the involvement of Fine Gael and/or Fianna Fáil will be required in some shape to form a government.

But that phase may not begin in earnest until the Dáil has failed to elect a taoiseach. More than one such failure in the Dáil may be required before the decisive negotiations take place.

Didn’t Sinn Féin win the election? Doesn’t it have to be in government?

Sinn Féin certainly got the highest number of votes, though the party is one behind Fianna Fáil in Dáil numbers.

That gives the party great political strength and momentum, which it is moving to consolidate by managing the preliminary government-formation process this week. But in the real world of Dáil numbers 25 per cent of the vote does not automatically entitle Sinn Féin to a place in government, or anything else.

For that, McDonald has to assemble 80 votes. Ultimately, that means she will have to talk to Fianna Fáil and Fine Gael – if they agree to talk to her.

How long could this go on?

In 2016, the process took from early March until early May. Many of the people involved expect this will take at least as long.