Diminished Fine Gael preparing for a period in opposition 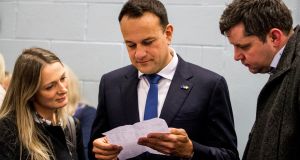 Finishing third in first preference vote share and in Dáil seats should not be cause for celebration, but Fine Gaelers see the outcome of the weekend’s general election as their Dunkirk moment.

Taoiseach Leo Varadkar has been defeated and will lead the smallest of the big three – Fianna Fáil, Sinn Féin and Fine Gael – into the 33rd Dáil.

Fine Gael will finish with a seat haul in the low to mid 30s, but the TDs who survived the electoral cull – which sees Fine Gael’s seat tally drop from the 50 it won at the 2016 general election – were preparing themselves for a period in opposition.

They have been taking some solace in the fact that Fine Gael had not been hugely outstripped by Fianna Fáil.

With Fine Gael still within touching distance of its two larger rivals, party figures believe it has been left with a base from which to rebuild.

And, despite failing where those who supported him for the party leadership thought he would succeed – in bringing Fine Gael electoral success – there is little sign of any pressure on Varadkar’s leadership from the parliamentary party.

Senator James Reilly, defeated in Dublin Fingal, raised the prospect of Fine Gael looking afresh at Varadkar’s position, as did Paudie Coffey, another outgoing Senator, but nobody else followed.

There is some disquiet about Varadkar at grassroots level, however, with one experienced canvasser saying there is “a growing acceptance that Leo can’t continue as leader beyond the short term and that the buck has to stop somewhere”.

Senior party figures had entertained the idea of entering into a new government arrangement with Fianna Fáil – most likely a grand coalition – on Sunday, but soundings throughout the party proved this was not a popular option.

A view has taken hold among members, TDs and defeated candidates that Fine Gael should rebuild and take the opportunity, should it arise, to attack Fianna Fáil and Sinn Féin from the opposition benches.

John Paul Phelan, the Minister of State for Electoral Reform, was blunt. Speaking after his re-election as a TD for Carlow-Kilkenny, where Fine Gael TD Pat Deering also lost out, Phelan said a grand coalition is now not an option.

“There will be no grand coalition,” he said. “People wanted change and that is what they voted for. I believe Fine Gael should go into opposition.”

Another party figure said a “hard no” was developing to the prospect of a grand coalition. Party sources also suggested Fine Gael is prepared to position itself as the pro-business party in the Dáil, in contrast to the left-wing policies of Sinn Féin and the centre left positions taken by Fianna Fáil.

Tánaiste Simon Coveney, who was beaten to the leadership by Varadkar, had already suggested Fine Gael would not be part of another confidence and supply deal and, as of now, the direction the party has set for itself seems clear: opposition under Varadkar.

But that position may come under pressure as the process of forming a government drags on, and if any members make their dissatisfaction with Varadkar known to their local TDs.