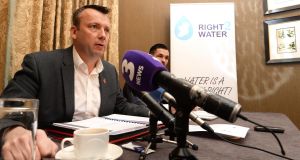 Brendan Ogle: “There is no party to represent a broad, progressive, human rights base.” Photograph: Cyril Byrne/The Irish Times

Former secretary of the ESB group of unions Brendan Ogle has said he is going to launch a new political party in September.

Mr Ogle made his announcement on The Sunday Show on TV3.

He was unable to say if there were any “high profile” people within the group involved in the formation of the party.

He said the party would have a mission statement.

“Everyone will follow the right to change policy platform,” he added. “We are ruling out a coalition with Fianna Fáil or Fine Gael and looking for a separation of Church and State.”

Mr Ogle said he was a “concerned citizen” who was worried about the political direction the country was taking.

“There is no party to represent a broad, progressive, human rights base,” he added. “We have 300 people involved in total; it is a small but growing groups.”

More than 50 people to be allowed in large churches under new guidelines 21:37
Man’s sex assault conviction quashed as trial juror was related to victim in separate case 20:45
Transgender Cork farmer (65) surprised at positive response to telling her story 20:39
Teenager arrested after allegedly driving over 210km/h during Garda chase 19:55
Covid-19: Mother and daughters moved into nursing home to tend to elderly residents 19:29