David Davis confident Britain and EU can seal deal and ‘basically, we will do as we do now’ 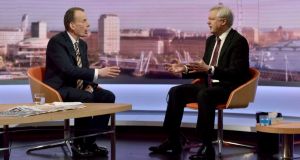 Brexit secretary David Davis (right) tells the BBC’s Andrew Marr that when it comes to the Border there will be “no cameras, no booths, no wire, no nothing”. Photograph: PA

Brexit secretary David Davis has promised that there will be no cameras or any other physical infrastructure on the Border after Brexit.

Mr Davis told the BBC’s Andrew Marr that he was confident that Britain and the European Union would reach an agreement on the Border’s future and that there would be “no cameras, no booths, no wire, no nothing”.

“That’s right. Basically, we will do as we do now, when we deal with smuggling across the Northern Ireland to Republic of Ireland Border, it’s dealt with by intelligence-led policing, intelligence-led customs investigations. It happens now and that’s what will happen in the future,” he said.

Officials from Britain, Ireland and the EU will meet on Monday to discuss options for the Border after Brexit following last week’s agreement in Brussels that a solution must be found by October. British ministers have recently offered loose definitions of a hard border, with Brexit minister Robin Walker describing it as one where physical infrastructure “gets in the way” of everyday lives.

Mr Davis offered a harder definition, effectively ruling out any physical change at the Border after Britain leaves the EU.

“A hard border is a border with customs posts on it, a very visible border. If you go to the Border now, all you can tell, moving from one nation to another, is that the paint on the road changes colour from white to yellow. What we’re going to do is to ensure that the Border which exists now, which after all is a border for excise, tax, even currency, will continue to exist but back away, it won’t be visible. There won’t be any return to the borders of the past,” he said.

Britain agreed last week that, unless and until another solution is found, a backstop agreement will effectively keep Northern Ireland in the EU customs union and single market. Mr Davis said Britain interpreted the backstop differently from the EU but expressed confidence that a better solution will be found.

“Option A is we get a free-trade agreement, we get a customs agreement, all of those make the Northern Ireland issue much, much easier to solve.”

Labour’s shadow Brexit secretary Keir Starmer said on Sunday that MPs from all parties should come together to enshrine in legislation at Westminster the backstop option on the Border.

The Oireachtas joint committee on the EU and the Seanad select committee on Brexit will be in London on Monday for meetings with Sir Keir and other MPs. In a speech on Monday, the shadow Brexit secretary will say that Labour will seek to amend the EU Withdrawal Bill to ensure that, if MPs vote down Theresa May’s Brexit deal, Britain will not automatically crash out of the EU with no deal.

“Our amendment would make it clear that, should the prime minister’s deal be defeated, it must be for Parliament to say what happens next,” Sir Keir will say.