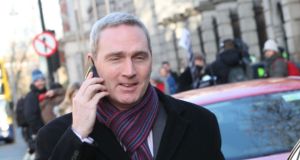 Ciaran Conlon. The former special adviser to Richard Bruton and Fine Gael official has lobbied on behalf of Responsible Retailing of Alcohol in Ireland. Photograph: Collins

Former Fine Gael Oireachtas members and special advisers from the last government are lobbying former colleagues over the controversial legislation to reduce alcohol intake in the State.

At least 10 former designated public officials have been involved in lobbying on the Public Health (Alcohol) Bill and on alcohol in general. They include two former Fine Gael senators and four special advisers to ministers during the party’s time in coalition with Labour.

The legislation proposes, among other things, to introduce minimum pricing to prevent the sale of cheap alcohol; to have stricter health labelling on alcohol products; to have more stringent advertising rules; and to have physical separation of drink in retail outlets.

Ciaran Conlon, a former special adviser to Richard Bruton and Fine Gael official, has lobbied on the Bill on behalf of Responsible Retailing of Alcohol in Ireland group. He said that all his contacts were transparent and did not present a conflict. “We work in a professional environment. I hope that I approached my work professionally when I was in government and outside government as well.”

Former Fine Gael TD Dr Liam Twomey is serving as medical director of DrinkAware, a responsible drinking initiative funded by alcohol companies and large retailers. Imelda Henry, a Fine Gael senator until last year, has been lobbying on behalf of the Vintners’ Federation of Ireland, which is campaigning in favour of the Bill.

In the latest reporting quarter, there have been 22 returns related to the Bill, almost evenly split between those supporting and opposing the Bill. Some 1,675 bodies and individuals have registered as lobbying organisations since the introduction of the register less two years ago.