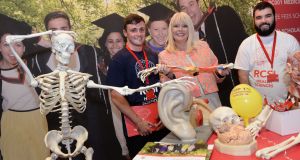 Minister of State for Higher Education Mary Mitchell O’Connor has said she is happy to forgo a salary increase for her new role as a super junior Minister after a report found she is ineligible for the payment.

Ms Mitchell O’Connor has been informed she is not entitled to an extra €16,288-a-year allowance, which is given to Ministers of State who attend Cabinet meetings.

Speaking to The Irish Times, Ms Mitchell O’Connor insisted she was not motivated by the salary and would not engage in “tedious political manoeuvring”.

She added: “Therefore, to avoid needless party political distractions, and to allow this government get to work in providing solutions and action, I’m happy to forgo any increase in salary that comes with my position as super junior Minister for Higher Education.

“Our third level students and their educators deserve a voice at cabinet – all that concerns me is providing that voice.”

Existing legislation says the Taoiseach can appoint a maximum of two super junior ministers to sit at the Cabinet table.

The legislation provides for an extra €16,288-a-year allowance in addition to the minister of State salary of €124,439.

The issue was first raised by the Labour leader Brendan Howlin and a review was carried out by the Attorney General Séamus Woulfe. Its findings were given to the Minister for Public Expenditure Paschal Donohoe in recent days,

Ms Mitchell O’Connor and Government chief whip Joe McHugh will not receive the additional money and will be paid less than their counterparts.

The Minister of State for Higher Education said she met Taoiseach Leo Varadkar and Mr Donohoe last week to confirm her decision not to contest the report’s findings.

The report also found Minister for Social Protection Regina Doherty should pay back the money she received as government chief whip.

Ms Doherty served in that position for less than a year and earned €15,829 for that role. The report found she was not eligible for that payment and must pay the money back.

Speaking to reporters on Monday Ms Doherty said it was “not the end of the world” and she was happy to pay the money back.

The Minister added: “I’m not annoyed at all, to be honest – the experience that I got being the chief whip for 12, maybe 13 months last year, I couldn’t have gained that experience in any other department.

“I got to stick my nose into everybody’s business and learnt a lot. And you know what, they made a mistake, we all make mistakes.”