‘Stroke politics’: from disappearing trees to a non-Irish Gaeltacht 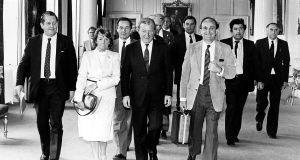 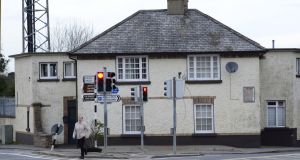 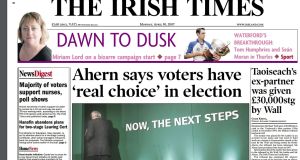 Front page of The Irish Times on Monday, April 30th, 2007, the day after Bertie Ahern asked president Mary McAleese to dissolve the Dáil and call an election for Thursday, May 24th. 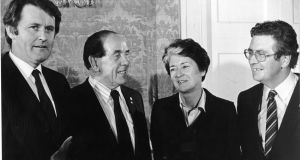 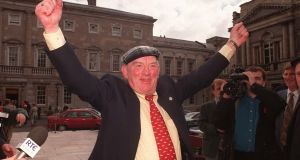 Jackie Healy-Rae disclosed that he had achieved €71 million for Kerry roads in the 2007 deal. “The question was – in pounds, shillings and pence, what was I looking for that would sort out South Kerry for me,” he recalled. Photograph: Alan Betson

It was not so much the reopening of Stepaside Garda station that suggested “stroke politics” – it was the unsubtle banners that festooned the constituency of Dublin Rathdown proclaiming it was all down to the influence brought to bear by Minister for Transport Shane Ross.

The art of the stroke is a long if not quite venerable tradition in Irish politics, where TDs and ministers have pulled off audacious coups for their own backyards or to further their careers.

A Donegal supermarket owner John McNulty is a surprise appointment to the board of the Irish Museum of Modern Art (IMMA) despite having no record whatsoever in the world of arts. It subsequently turns out he is also Fine Gael’s candidate to replace Deirdre Clune (its newly elected MEP) after she has vacated her Seanad seat.

The political difficulty is that Clune was on the culture and education panel. McNulty could not become a candidate unless he could show some “form’ or connection to either area. Ergo, the IMMA appointment.

When news of this blatant stroke emerges, the new minister for arts Heather Humphreys gets herself in a lot of hot water and performs miserably in media interviews, as she tries to defend the indefensible. Taoiseach Enda Kenny is accused of cronyism and stroke politics. McNulty withdraws from the race allowing the Independent Gerard Craughwell to win the seat.

For no logical reason, two additional locations are added to the preferred list of new primary care centres in the State. One is in Swords and the other is in Balbriggan. Both just happen to be in the constituency of then minister for health James Reilly. His junior minister, Róisín Shortall, resigns from the position in protest, as the the controversy rumbles on. Her party leader, Eamon Gilmore, when asked if it was a stroke, replies: “You can call it what you like”, before saying the government’s priority was better primary health care for all.

It was Easter Sunday. Shortly after dawn, Bertie Ahern travelled up to Áras an Uachtaráin to inform president Mary McAleese he was dissolving the Dáil. The move took everybody by surprise, save for the Sunday Independent which he had tipped off about his surprise move. Ahern was under pressure at the time over his personal finances, but the announcement gave him the early initiative and Fianna Fáíl won the election.

In a massive political stroke, Charlie McCreevy announces he intends to decentralise 10,000 civil servant jobs and move most government department headquarters outside Dublin. The announcement takes everybody by surprise. There is no strategic thinking behind it, and no alignment with the national spatial strategy. New locations just happen to coincide with constituencies of ministers. For example, much of the department of arts and sports is to be shunted to Killarney, which just happens to be the home constituency of the minister John O’Donoghue. The most blatant PR from this stroke is done by Progressive Democrats junior minister Tom Parlon, who puts up posters all over Offaly, which had done particularly well from the exercise. “Welcome to Parlon Country,” they proclaimed.

In the final week of the 2002 general election campaign, it was clear Fianna Fáil was doing exceptionally well. Employing an eye-catching stunt, Progressive Democrats candidate Michael McDowell climbed up a ladder on a lamp-post to put up a poster with the dire warning: Single Party Government No Thanks.

That one move prevented Fianna Fáil getting an overall majority and it won the PDs eight seats. When things looked bad for the PDs in 2007, McDowell tried the stroke again, but he was ambushed by John Gormley of the Greens. What followed was a shouting match that became known as the the Rumble in Ranelagh and which, effectively, secured the seat for Gormley.

In 1982, newly elected Independent TD Tony Gregory pulled off an audacious stroke when he got Charles Haughey to give him a written commitment for multimillion investment in his Dublin Central constituency, which had major problems with unemployment, deep poverty, poor health outcomes, alcoholism and drug addiction.

In 1997, four Independents – Jackie Healy-Rae, Mildred Fox, Tom Gildea and Harry Blaney – did a similar deal with Bertie Ahern in exchange for goodies.

Later Healy-Rae and Michael Lowry had an arrangement with Fianna Fáil. Post-retirement, Healy-Rae disclosed he had achieved €71 million for Kerry roads in the 2007 deal. “The question was – in pounds, shillings and pence, what was I looking for that would sort out South Kerry for me,” he recalled.

Charles Haughey was taoiseach and hoped to achieve a slim Dáíl majority for Fianna Fáil. Eileen Lemass was the party’s candidate, but was struggling against Fine Gael’s Liam Skelly. On the eve of the poll, then minister for the environment Ray Burke and a group of workmen arrived into a housing estate that had been looking for a landscaping scheme and proceeded to plant trees in every green area. However, the day after polling, and after Fianna Fáil had lost, the workmen returned to take back all the trees.

Labour TD and minister for local government Jim Tully orders a radical redrawing of constituencies. He changes most Dublin constituencies from four- and five- seaters into three-seaters. The rationale is to take advantage of what is perceived as Fianna Fáil’s relative weakness in the city. If the party gets less than 40 per cent, then Fine Gael and Labour can win two seats out of three and remain in power.

A word was coined for such chicanery: “tullymander”, a variation of gerrymander.

It seemed a very clever plan. The only way it would not work was if FF won over 40 per cent of the vote. Sadly for Tully and the Fine Gael-Labour coalition government of the time, that is exactly what Fianna Fáil did. It won the 1977 general election by a landslide, winning two out of three in most Dublin constituencies.