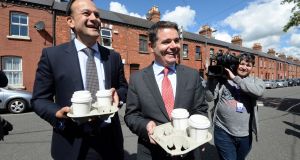 Fianna Fáil and Fine Gael expect the budget to contain a mixed income tax package that combines a small cut in the Universal Social Charge (USC) and a raising of the threshold at which people hit the higher rate of income tax.

After an initial round of talks, Fianna Fáil is also understood to be confident that one of its key demands, on mortgage interest relief, will be met. The tougher negotiations are to take place next week.

Fianna Fáil had insisted Taoiseach Leo Varadkar and Minster for Finance Paschal Donohoe honour an agreement outlined in the confidence and supply deal on the issue of mortgage interest relief. The deal between Fianna Fáil and Fine Gael, which underpins the minority Government arrangement, commits to retaining “mortgage interest relief beyond the current end date of December 2017 on a tapered basis”.

However, an arrangement on mortgage interest relief is now thought to be more expensive than had been initially expected.

Last year, Michael Noonan, as minister for finance, announced the relief would be extended from 2017 to 2020 but the details were left to this year’s budgetary talks. The issue of mortgage interest relief has been prioritised by Fianna Fáil finance spokesman Michael McGrath.

Sources earlier this week suggested it would cost between €60 million and €100 million next year, but it is now expected to cost significantly above €100 million. The average benefit for those in receipt of the relief is about €600 now, but this drops as it tapers off.

While the nature of the budget is that the entire package is not signed off on until everything is agreed, Fianna Fáil is confident it will get what it wants on mortgage interest relief.

Mr Donohoe is understood to be adamant that the threshold at which people pay the higher rate of income tax will rise, in line with pledges made by Mr Varadkar.

Currently workers begin paying the higher 40 per cent rate at €33,800. It is understood Mr Donohoe has not spelled out by how much he wants the threshold to rise. Fianna Fáil is equally determined that the promise to reduce the USC, contained in the confidence and supply deal, is also kept. Sources on both sides say they expect the final taxation package to be a mix of both priorities.

A number of revenue-raising measures are also expected in order to pay for the tax and spending commitments.

However the special 9 per cent VAT rate for the hospitality sector is understood not to have come under consideration, with Government sources suggesting it will be left untouched.

Sources confirmed that a range of tax rises are on the table to pay for spending commitments and income tax cuts. These include excise on alcohol and tobacco, a sugar tax, as well as a number of other measures. The Government only has €350 million of new money to spend.