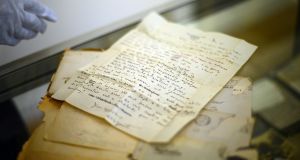 Letters between WB Yeats and his lifelong friend and first lover Olivia Shakespeare were among the items auctioned in London. Photograph: Bryan O’Brien

Minister for Culture Heather Humphreys said it was a “wonderful day” that the State had been able to acquire “significant items” from the Yeats collection which went for auction in London on Wednesday.

She made her comments in the Dáil as Labour arts spokeswoman Joan Burton accused the Minister of presiding over a situation where a “shameful auction” had taken place in London “for lack of €2 million, which was the reserve price put on the auction contents”.

Ms Burton said the Minister should be “ashamed” and should feel “regret and embarrassment that a key part of Ireland’s literary, artistic and culture history has been sold off to the highest bidder through a London auction room”.

However, Ms Humphreys insisted the National Library and the National Museum had the expertise “to ensure that the most significant items were purchased”.

She pointed out that “as much as I would like it I do not have an endless pot of gold” but stressed that “this is very good news today because Ireland has acquired some very important items to add to our existing WB Yeats collection”.

The Minister said she supported the National Library and the National Museum in acquiring a number of items in advance of the Sotheby’s auction, including providing €500,000 for the library to buy more than 500 letters between WB Yeats and his wife George Yeats

The Minister added that the Yeats family would donate the remaining family archive and items currently on loan to the National Library for its long-running Yeats exhibition.

Ms Humphreys said in the past few years the State had spent more than €4 million in acquiring material from the Yeats collection, which “by any standards . . . is a very significant investment”.

This meant that “Ireland has the single biggest Yeats collection in the world”, the Minister added.