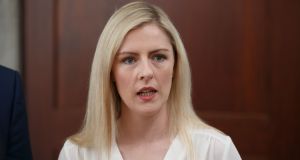 Fianna Fáil’s Lisa Chambers has previously apologised for mistakenly voting for Fianna Fáil TD Niall Collins, who was not in the Dáil chamber. Photograph: Fran Veale for The Irish Times

Fine Gael has complained to the Dáil members’ interests committee about Fianna Fáil TD Lisa Chambers following reports that she may have voted for her colleague Timmy Dooley in the chamber last January.

The complaint is the latest episode of sniping between the two parties as speculation continues to intensify about a general election in the new year.

Louth TD Fergus O’Dowd on Monday wrote to the clerk of the committee asking that it investigate reports that Ms Chambers had voted for Mr Dooley on seven occasions on January 17th. Mr Dooley has said he was present in the chamber for these votes.

Ms Chambers has previously apologised for mistakenly voting for Fianna Fáil TD Dara Calleary who was not in the Dáil chamber.

In the controversy that followed the revelations about Dáil voting, it emerged that the practice of TDs voting on behalf of other TDs who were in the chamber – but not in their seats – was commonplace. That practice has since been stopped by the Ceann Comhairle, but Fine Gael and Fianna Fáil continue to trade accusations on the subject.

Mr O’Dowd confirmed to The Irish Times that he had in the past “on a few occasions” voted for other TDs, but only when they were in the Dáil chamber.

Fianna Fáil sources responded by circulating material suggesting Fine Gael TDs, including Mr O’Dowd, voted in different seats, or were not present in the chamber when votes were cast in their seats.

Ms Chambers could not be reached for comment, but senior Fianna Fáil sources accused Fine Gael of “classic personal attacks”.

No plans for meeting

Senior figures in both parties said on Monday night there were as yet no plans for a meeting between Taoiseach Leo Varadkar and the Fianna Fáil leader Micheál Martin this week.

Mr Varadkar said at the weekend he expected to meet the Fianna Fáil leader at the end of the Dáil term or the beginning of next term to respond to Mr Martin’s appeal to agree an election date after Easter.

Mr Varadkar is thought to be under pressure from senior Fine Gael Ministers to choose a February election date after the UK has left the EU.

But Minister for Social Protection Regina Doherty accused Mr Martin of pushing for a general election date because “he has lost control and he doesn’t like it”.

Her comment follows reports of a letter from Mr Martin to the Taoiseach calling on him to “step in and give some certainty” by setting an agreed election date.

In the letter he said Easter would be the “natural end of this Dáil” and that setting a date would prevent the “sudden shock” of a motion of no confidence.

However, on Newstalk radio Ms Doherty said Mr Martin was only calling for certainty because the recent byelection results meant that Fianna Fáil was no longer the only party that could bring down the Government.

“He knows full well he is not in charge anymore and he is losing his life,” she said.

The party has another two candidates, Damien Geoghegan and John Cummins, selected for election.

Mr Coffey, from Waterford, has served as a Senator since May 2016. He previously served as Minister of State for Housing and Planning from 2014 to 2016.

“I look forward now to focusing on the next chapter of my life and spending more time with my wife and three children,” he said.

Mr Varadkar thanked him for “20 years of unbroken service as a minister of state, TD, senator, and councillor”.

“I’m very sorry to hear about his decision but I can understand his wish to spend more time with his wife and family and pursue other opportunities. He has been a fantastic representative for Waterford and we will miss him in the party.”