There is a ‘very real window’ to restore the North’s government, says Coveney 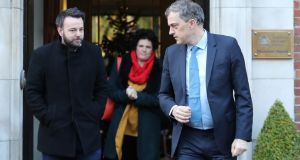 There is a “very real window” to restore the North’s government that “all of us need to take”, the Tánaiste and Minister for Foreign Affairs said at the end of the first day of talks aimed at restoring the power-sharing Assembly at Stormont.

Simon Coveney met the North’s Secretary of State in Stormont House on Monday following meetings between Julian Smith and representatives from each of Northern Ireland’s five main political parties.

He said the discussions had gone well, and his meeting with Mr Smith had been “very positive”.

There has been no devolved government in Northern Ireland since January 2017, when the Assembly collapsed following a scandal over a renewable heating scheme.

Sinn Féin president Mary Lou McDonald said her party had outlined three “ingredients for success” which she believed were “achievable”.

But all sides agreed it would take “political will” to see Stormont restored.

The parties are due to meet individually with Mr Coveney ahead of roundtable discussions on Wednesday, when he said he hoped “the governments and the parties will together be able to agree a way forward”.

The nurses’ strike scheduled for Wednesday, he said, was a reminder to everybody that “now is the time to get this done”.

Mr Smith said the people of Northern Ireland had told politicians “loud and clear” that they want the powersharing government restored.

But for that to happen, he warned, the issues that need resolving must be addressed “head on”.

“I think the idea that we just paint over the cracks, get it up and running and then it fails in a few weeks or a few months is not a good one,” he said.

The biggest sticking point has been an Irish Language Act, which Ms McDonald told reporters could be resolved.

“Everybody knows that language rights have to be met, I hope at least everybody has arrived at that conclusion,” she said.

Ms Foster said what was needed was “a new cultural and linguistic deal, one that recognises the rights, the security and confidence of everybody in Northern Ireland.

Both the DUP and Sinn Féin also asked the Secretary of State for a “cash injection” to deal with the crisis in the health service which had led to spiralling waiting lists and industrial action by nurses and healthcare workers.

But the leaders of the SDLP and the Alliance Party said if there is no progress, the two governments should release a document they are preparing which outlines what they believe is the best way forward.

“If the parties can’t come to an agreement in a couple of days I think the two governments should put a document in place and force us to either say ‘yes’ or ‘no’,” said Colum Eastwood. “Let’s get on with it.”

“My advice to the governments is if they can’t get agreement around the table that they publish their draft and ask parties either to accept or reject it,” said Naomi Long. “Let’s decide once and for all, and let the public know.

UUP leader, Steve Aiken, said with “goodwill” and “substantial reform” a deal might be done by the middle of January, but if that was not possible then there must be a return to direct rule.

Healthcare workers and children from Irish-medium schools took part in protests outside Parliament Buildings as the talks were taking place.