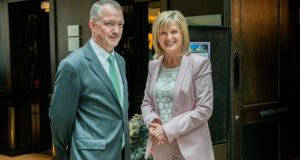 Cllrs Sean Haughey and Deirdre Heney at the recent FF Dublin Bay North selection convention. There is major division in party over whether Mr Haughey should be added to ticket. Photograph: Brenda Fitzsimons

A number of high-profile Fianna Fáil candidates, including Seán Haughey, will learn in the coming days if they will be automatic selections on the party ticket for the forthcoming general election.

Mr Moynihan said yesterday that the committee had reached decisions in relation to individuals and also about how it would proceed in the 11 constituencies that had yet to hold conventions.

“We held a meeting [on Saturday] to see how it is going,” he said. “We looked at each constituency to see what needs to be done at this stage.”

Mr Moynihan said that he would not be disclosing the nature of the decisions taken until Fianna Fáil headquarters and the individuals concerned had been contacted.

The party has selected proportionately fewer women than the other registered parties to date, but Mr Moynihan insisted the party would meet the gender quota, now required under electoral funding legislation. No less than 30 per cent of the candidates must be female, otherwise the party will forgo a portion of its electoral funding.

“There are no ifs or buts about it. The law demands it, and we will reach that quota,” he said.

Senior party sources said there was huge division within the party as to whether Mr Haughey, a former TD, should be added to the ticket in Dublin Bay North, where Cllr Deirdre Heney won through at convention. Polls show that Mr Haughey has the potential to poll most strongly, although some Dublin representatives have argued that the party should adhere to its one-candidate strategy and fully back Ms Heney. They say the decision by former party member Senator Averil Power to stand as an Independent reinforces that view.

Similarly, there have been arguments made within the party that it should decide on one female candidate in another key Dublin target, Dún Laoghaire. Of the four potential candidates in the constituency (which has been effectively reduced to a three-seater, as Ceann Comhairle Seán Barrett is a TD there and would be returned automatically to the Dáil), it is thought that the sole male candidate, Cllr Cormac Devlin, may be backed by most delegates in the constituency.

Ms Feeney said she opposed any “single-gender diktat” being handed down by the party centrally. “There would be huge disquiet among the members if there is an order to impose a gender requirement for a single candidate,” she said.

Ms Hanafin did not comment on the possible gender requirement but said that a single-candidate strategy was needed if the party hoped to retain a seat.

“I would be very happy to run for Fianna Fáil, and I think I would have the best chance of winning a seat,” she said.

Party sources dismissed the possibility of Conor Lenihan being nominated as its candidate for Roscommon-East Galway. The frontrunner for the candidacy is Dr Keith Swanick, a GP based in Co Mayo who is a native of Castlerea.

The favourite for another difficult constituency, Dublin Central, is the party’s candidate in last year’s European election, Mary Fitzpatrick. The constituency, once the base of former taoiseach Bertie Ahern, has been reduced to a three-seater.