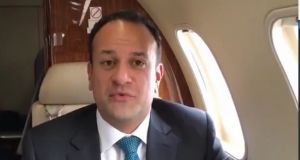 Taoiseach Leo Varadkar in a screengrab from a video filmed on board the Government jet.

Taoiseach Leo Varadkar has “crossed the line” by using State funds to promote a political message, Fianna Fáil has claimed.

Fianna Fáil on Tuesday published new legislation to enforce regulations for all online political advertisements, including a clear outline of who is paying for the ads.

Mr Lawless said the unit was promoting individual Ministers but not Independent Ministers. “If I was in the Government’s shoes, I would welcome it and support and ensure there is nothing to hide here.”

The unit, whcih was set up after Mr Varadkar succeeded Enda Kenny, is tasked with communicating the message of the Government to the public. It has been strongly criticised by Opposition leaders, who have alleged it is being used to promote political propaganda.

The Bill by Fianna Fáil aims to ensure all online political ads carry a transparency notice outlining the name and address of the person, company, organisation or entity that paid for the advertisement and who the intended market is.

If the entity is the State, or an arm of the State, there will be a requirement to make that clear.

Mr Lawless also raised concerns about the use of State buildings and State vehicles to promote Fine Gael messages.

In his weekly message to party supporters, Mr Varadkar often films from his office in the Department of the Taoiseach and once from the Government jet.

Mr Lawless said this would not be covered in the Bill but was of concern to his party. “If that was to be elevated where essentially the office of Taoiseach and the offices of the State began to become a backdrop for Fine Gael promotional videos, that would be a real concern to our democracy.”