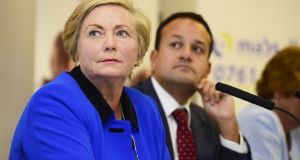 Former tánaiste Frances Fitzgerald and Taoiseach Leo Varadkar: It would have been “wholly wrong” of Ms Fitzgerald to involve herself in the workings of a commission of inquiry, says Ms McPhillips. Photograph: Cyril Byrne

The Department of Justice has insisted it could not have objected to the legal strategy being pursued by the former Garda commissioner against a whistleblower.

Acting secretary general Oonagh McPhillips is to appear before the Oireachtas committee on justice on Wednesday where she will respond to criticisms of her department in recent weeks.

It emerged last week former minister for justice Frances Fitzgerald and a number of her senior officials were aware of the approach by then Garda commissioner Nóirín O’Sullivan to undermine Sgt Maurice McCabe at the O’Higgins commission, which was examining allegations of Garda malpractice.

If a minister sought to influence a case which might be made at a commission, their ability to take action in relation to any findings where wrongdoing was established would be severely compromised

In her opening statement to the committee, Ms McPhillips says the department remained of the view that Ms Fitzgerald would have been “wholly wrong” to involve herself in the workings of a commission of inquiry.

“It would be unsustainable for the minister of the day to suggest that the defences or arguments which they could offer to the commission should be changed or circumscribed. It is a matter for the commission to reach its judgment on the evidence and cases made to it.

“If a minister sought to influence a case which might be made at a commission, their ability to take action in relation to any findings where wrongdoing was established would be severely compromised.”

The department was also criticised in recent weeks for failing to use its legal representation at the commission to intervene.

However, this is rejected by Ms McPhillips, who says a third party whose actions are not in question at a particular part of a commission’s proceedings cannot express views on matters arising at that time.

“In that context the legal team which represented departmental officials was not present at commission hearings until a later module was being considered in October 2015.”

The department has also stressed its belief it has fully complied with an order from the Disclosures tribunal, which is investigating an alleged smear campaign against Sgt McCabe. It emerged last week three emails notifying Ms Fitzgerald of the legal strategy were not sent to the tribunal.

Elsewhere in her opening statement, Ms McPhillips defends the department against the criticism it has received in recent weeks.

While she acknowledges many civil servants make mistakes, she stresses her belief that the majority of those in her department are striving to provide the best public service they can.

Speaking in the Dáil, Minister for Justice Charlie Flanagan said a senior counsel is to be appointed to investigate the department in the near future.

He also told the House he would be proceeding with the appointment of a new Garda commissioner in the new year.

Mr Flanagan said the job specification would be outlined by the end of the year and the recruitment process would take six months to complete.