Cabinet agrees heads of Bill for referendum on abortion 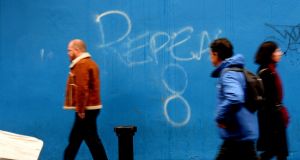 A mural in favour of repealing the Eighth Amendment in Temple Bar in Dublin. File photograph: Cyril Byrne/The Irish Times

The Government has agreed voters should be asked to repeal the Eighth Amendment and allow the Oireachtas to legislate for the provision of abortion in accordance with the law.

The draft heads of a Referendum Bill were passed by Cabinet at its weekly meeting yesterday, and Ministers were informed the final draft would be considered at a meeting on March 6th.

Minister for Health Simon Harris told the meeting he would also be in a position to outline how the Government proposes to legislate for abortion at the meeting.

The Irish Times understands the policy paper will seek to repeal the Protection of Life During Pregnancy Act and replace it with a new piece of legislation.

It will provide for terminations “without specific indication” up to 12 weeks, meaning women will not have to provide an explanation when seeking an abortion in the first trimester of pregnancy.

The legislation will also clarify that abortion pills can be provided in all medical settings up to 12 weeks, but this will be a GP-led service.

The policy paper will also confirm there must be a “serious threat” to the life, health or mental health of a mother before a termination can be provided after 12 weeks.

In the cases of mental health, the opinion of three medical professionals will be sought before a termination is granted. Two opinions will be required when both the health and life is at risk.

It is expected no gestational limits will be applied in these cases or in the case of fatal foetal abnormalities.

Decriminalisation of women who procure a termination will be provided for but medical professionals who perform abortions outside the legislation will face criminal sanction.

The Department of Health is currently finalising the final details of the policy paper with the office of the Attorney General Séamus Woulfe.

It is expected a detailed policy paper will be given to Cabinet on March 6th and published afterwards.

The heads of a Bill, however, will not be produced until the end of March or beginning of April.

Discussions with the interested bodies will not take place until after the referendum result is known, it is understood.

However, consultations with the Irish College of General Practitioners have already been initiated.

Meanwhile, the Government has also reaffirmed its commitment to work towards holding a referendum on the Eighth Amendment at the end of May.

Speaking in the Dáil, Taoiseach Leo Varadkar said it was “the Government’s intention to hold the referendum before the end of May, notwithstanding some of the reports I’ve read to the contrary”.

In a statement after the Cabinet meeting, Mr Harris said the exact date of the referendum would be set following a debate and vote in Oireachtas, but added he was confident the timeline could be met.

Mr Harris said the referendum would propose that Article 40.3.3 be deleted in its entirety and a clause inserted that makes it clear that the Oireachtas may legislate to regulate termination of pregnancy.

“It is important to remember that the referendum must be passed, and the Eighth Amendment repealed, if anything is to change for Irish women,” he added.

It is understood Mr Harris will raise the issue at the Fine Gael parliamentary party meeting tonight and seek support to form a group within the party that is seeking repeal.