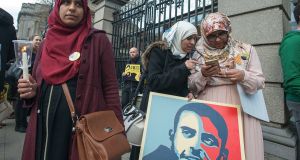 The Dublin-born man (21) has been held without trial in Egypt since being arrested in Cairo in August 2013 during Muslim Brotherhood protests .

The doctor had recommended Mr Halawa be returned to Ireland for a special medical evaluation on humanitarian grounds.

The Irish GP travelled to Wadi al Natrum prison last week along with ambassador Damien Cole and met with Mr Halawa for an hour-and-a-half. It comes amid concern concern about his health condition and hunger strike

Mr Kenny has said it is not appropriate for him to comment on Ibrahim Halawa’s detailed medical condition.

“These matters, as you know, are private and confidential,’’ he said.

Mr Kenny wrote to Egyptian president Abdel Fattahel-Sisi again this week appealing for his immediate release. The president had been quite clear that he could only use his powers of pardon after a court case had taken place, he said.

“We are very concerned about it and it is receiving the most urgent attention of any Irish citizen abroad,” Mr Kenny said.

The case is due before a court again on Wednesday.

He said Minister for Foreign Affairs Charlie Flanagan had been to Cairo on three occasions already.

Fianna Fáil TD Darragh O’Brien said the Government should again send Mr Flanagan to Egypt on a humanitarian basis and seek his release.

He said he understood Mr Halawa’s health was deteriorating gravely.

He has been in jail for more than 1,300 days awaiting a mass trial along with hundreds of others. During his time in jail his family have reported that he has been tortured, suffered electric shocks and beatings, been spat on and moved without their knowledge.

The Department of Foreign Affairs briefed his sister Somaia Halawa and family lawyers on Monday with the latest developments.

A candlelit vigil was held outside Leinster House by the group Uplift on Tuesday night with a petition calling for his human rights to be upheld.