‘My intention was never for political gain. I felt I was on solid moral ground,’ says Cathal Crowe 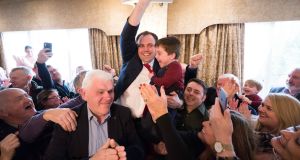 Cathal Crowe (Fianna Fáil) celebrates with his son Sam after being elected at the Co Clare Count at the falls Hotel, Ennistymon on Monday afternoon. Photograph: Eamon Ward

Fianna Fáil’s Cathal Crowe who has become a TD for the first time in Clare has said his objection to the Government’s Royal Irish Constabulary (RIC) commemoration did him “no harm” in the election.

Mr Crowe, in his capacity as Mayor of Clare, was the first politician to decline an invitation to the postponed, and probably now abandoned, commemoration which was due to take place in Dublin Castle on January 17th.

Dozens of other mayors and politicians subsequently voiced their opposition to the proposed commemoration on the grounds that it would remember those who had been in the vanguard against the IRA in the War of Independence and would also remember the Black and Tans and Auxiliaries who were drafted in to aid the RIC and the Dublin Metropolitan Police (DMP) during the War of Independence.

The furore over the commemoration was cited as one of the reason why Fine Gael declined dramatically in the first opinion polls published in January.

Mr Crowe was elected at his first time of standing for the Dáil. He supplanted his running mate Timmy Dooley who was one of the most high profile Fianna Fáil casualties of the election.

Mr Crowe, who is also a historian, said he did not raise his boycott of the proposed ceremony for electoral gain and never thought that it would become a national issue.

He added he had re-read the invite letter to the RIC commemoration from Minister for Justice Charlie Flanagan on the morning of the count as he was going through old files in his office.

“Reading it again, I couldn’t believe how wrongly they read the situation. I took a stand against it and I took to my Facebook page to outline how I felt about the whole thing,” he said.

“I didn’t expect to ignite a national debate but my intention was never for political gain. I love my history as much as I love my politics, my stand was principled.”

Mr Crowe said he considered resigning as Clare’s mayor over the issue if he was adjudged to be neglecting his duties in the office by not attending.

“I felt I was on solid moral ground and I wasn’t going to budge,” he added.

Asked what impact the issue had on his electoral chances, he replied: “I don’t think the issue did me any harm.”

Mr Crowe said there should be a commemoration now for the old IRA which led a revolution to help establish the State rather than those who had fought against it.

Outgoing Minister for Justice Charlie Flanagan, who proposed the commemoration, retained his seat in the newly constituted Laois-Offaly constituency but his first preference vote was well down on 2016. He polled 7,463 first preference votes in comparison with 8,370 in 2016 though direct comparisons are difficult as he was standing in only the Laois constituency in the last election. Most Fine Gael candidates saw their personal votes decline.

Mr Flanagan said his posters were “hacked up and defaced with graffiti” as a consequence of the commemoration.

He also acknowledged that the issue had come up on the doorstep “and I was personally targeted”.

He added: “I’m a democrat and I was disappointed by that”.

Former minister for health Senator James Reilly said the controversy over the RIC commemoration did not help the party in the election.

Senator Reilly, who announced his retirement from politics having failed to regain the seat in Dublin North that he held until 2016, said the RIC commemoration had been one of a number of “own goals” for Fine Gael.